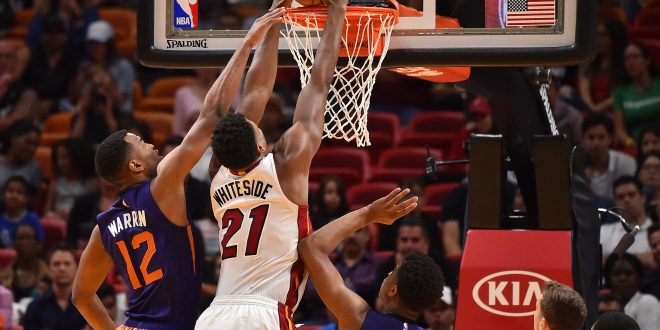 Heat Bounce Back With Win Over Phoenix

Miami’s back in playoff position in the Eastern Conference after a Tuesday night win against the Phoenix Suns 112-97.

Hassan Whiteside enjoyed a record-setting game, now having more rebounds in one season than any player in Miami Heat history. His 23-point, 14-rebound performance was overseen, after needing 13 stitches post-game in his right hand.

Whiteside headed back to the locker room with 2:08 left in the game, after getting caught in the foam attached to the bottom of the backboard. The cut is between Whiteside’s middle and ring finger, and his recovery length is unknown. Unfortunately, the team has seen this injury before with Whiteside previously missing 3 games in the 2014 -2015 season.

This season, Whiteside has a total of 936 rebounds in 66 games. Previous record holder Rony Seikaly had 934 rebounds in 79 games back in the 1991-92 season. It was also Whiteside’s franchise-record 57th game with double-digit rebounds this season, tying up again with Seikaly’s 91-92 season.

The Heat had seven players scoring in double figures last night with Tyler Johnson finishing with 17, and Goran Dragic coming up shortly behind with 16. The team also reached double digits in 3-pointers for the 34th time this season setting another franchise single-season record.

For the Suns, the team had 24 turnovers that led to 23 Heat points.  Forward Marquese Chriss led Phoenix with a total of 24 points but it just wasn’t enough for the Suns.

Going into Tuesday night’s game, the Heat were coming off of their second home game loss of the season. Since Jan. 17 all 6 of the team’s losses have come from teams with losing records. Now at 65-36, Miami’s back in playoff position with the Detroit Piston’s loss Tuesday to the Brooklyn Nets.

Take a look back at some of the best moments from tonight's 15-point home victory over the Phoenix Suns! pic.twitter.com/QwGKqAHP9X

The Heat prepare for a Thursday night home game against the Toronto Raptors. Following, the team faces the Boston Celtics and then a playoff tiebreaker in Detroit against the Pistons.