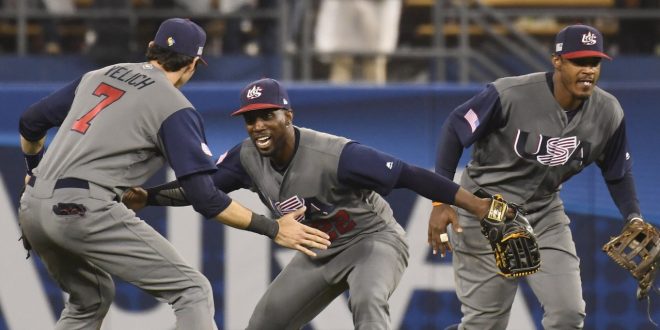 Regardless of the outcome, a first-time champion will be crowned in the World Baseball Classic finals tonight between Team USA and Puerto Rico.

Team USA’s finals berth marks the first of its kind since the tournament’s 2006 inception. Previously, they hadn’t made it past the semi-finals. Puerto Rico is looking for redemption after losing to Dominican Republic in the 2013 WBC Finals.

Team USA capped off a tense game against unbeaten Japan on Tuesday night in the semi-finals. Frequent hero Adam Jones used an RBI groundout to give his team the go-ahead run in the 8th inning. Jones has been a clutch performer thus far, with two home runs in the tournament, a walk-off in team USA’s first game and not only the catch of the tournament, but potentially the year.

Adam Jones just robbed Manny Machado of a home run and it was glorious. pic.twitter.com/IP6A83jP27

Jones spoke after the win against Japan, shedding light on what it means for his team to make its first finals ever.

Puerto Rico has won fans over with their blond-dyed hair and a flair just as loud. They squeaked out an 11th inning victory against the Netherlands on Monday to advance. Puerto Rico is loaded with middle infield stars like Carlos Correa and Francisco Lindor, but it’s been Javier Baez who’s stolen the spotlight.

Against the DR, he captured the attention of millions when he started celebrating a caught stealing before actually tagging the player himself or even looking at tag.

Then against the Netherlands he was on the other end of a steal, this time as a runner, and showed off some incredible awareness to avoid what seemed to be a sure out.

Oddly enough, this is the second time these two meet in the tournament. Less than a week ago, PR beat USA 6-5 to advance to the semi-finals. Puerto Rico ambushed USA, scoring four runs in the first inning. Ominously enough, they scored all four against Marcus Stroman, the same pitcher who’ll take the mound tonight for Team USA. Stroman lasted 4.2 innings and surrendered four earned runs on eight hits.

Puerto Rico ran wild on USA that night, notching five steals (including three by the aforementioned Baez), so team USA catcher Buster Posey will need to be on high alert.

Team USA is hoping Stroman’s ineffectiveness against Puerto Rico on March 17 was an outlier. In the tournament, he’s pitched 9.1 innings and given up 11 hits and four runs with six strikeouts. Nearly all of that damage came against PR.

Seth Lugo also faced Team USA that Friday and wasn’t without his faults, though his results were better than Stroman’s. He went 5.2 innings and allowed three earned runs and home runs to Jones and Posey.

On pure talent alone, Stroman far outshines Lugo. The latter is expected to be the Opening Day starter for the Blue Jays while the former isn’t even expected to crack the New York Mets’ rotation.

The X-factor for Puerto Rico, though, comes in the back-end of the bullpen. Pitcher Edwin Diaz has been an electric closer, akin to Andrew Miller from the 2016 playoffs. Despite not being a starter, he leads the team with nine strikeouts in 5.1 innings with two saves.

It doesn't much sexier than Edwin Diaz painting the outside corner at 99mph with life. Gorgeous. pic.twitter.com/1YQis3ashd

Threats At The Plate

USA has a couple of players swinging the bat well. Eric Hosmer has usurped MVP candidate Paul Goldschmidt as the team’s first baseman the last few games, but he’s performed well despite critiques against manager Jim Leyland. Hosmer is slashing .375/.444/.625 in 24 at-bats with a home run and five RBIs. He also has the team’s lone stolen base all tournament.

Like Hosmer, shortstop Brandon Crawford also has nine hits to go along with four RBIs. But otherwise, the team has been generally boom or bust. Nolan Arenado and Giancarlo Stanton have two home runs, but just six hits in 43 at-bats. Jones, for all his heroics, is still just batting .226.

On the Puerto Rican side, the bats are much hotter. Of those with 15 at-bats (nine players), six players are hitting at least .300. Correa is leading the charge with three home runs and 9 RBIs. Lindor is tied for team lead with 10 hits and hasn’t struck out once in 23 at-bats. And in the speed category, they have 10 steals, giving them one more dimension than USA.

Puerto Rico is the home team by virtue of a coin flip.