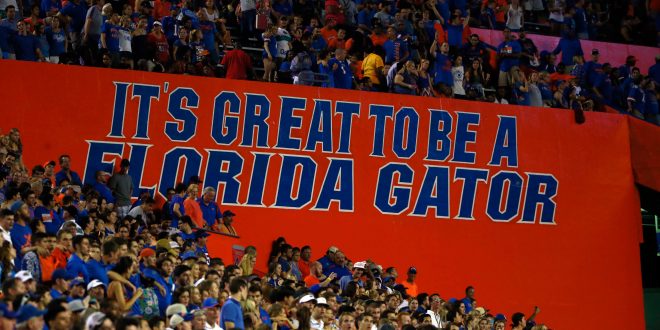 With the Orange and Blue game just over a week away, one question that continues to linger for many Gator fans is simply this…who will be named the starting quarterback?

Kyle Trask and Feleipe Franks are two players that everyone has their eyes on during spring camp. Both are early enrollees, both redshirted their freshman year and both want to be the next big thing to lead Florida’s football team.

Kyle Trask, a three-star recruit out of Manvel High school near Houston, has always lived in the shadows of his teammates.

Trask was the backup QB at his school and during his senior season, he completed 73.4% of his passes (47-64) for 759 yards with 10 touchdowns and zero interceptions. He also had 18 carries for 49 yards and one touchdown. Trask was discovered by coach Randy Shannon who visited Manvel High to scout Houston signee and one-time TCU commit, D’Eriq King.

However, Trask does not view his high school career as a disadvantage but sees it as a blessing instead. Trask says he has always been the underdog but says thats what gives him the ability to compete and work hard.

Now, Trask is competing to be the starting quarterback at an SEC school. A huge accomplishment for a guy who before Florida, had only three other offers that came from FCS programs.

Trask says he continues to work on his vocal leadership on the line and says he has come a long way in just a year.

Feleipe Franks from Crawfordville, Florida arrived on campus as a four star recruit, ranked as the number five pro-style quarterback in the 2016 class according to several recruiting services.

During his senior year Franks threw for 2766 yards with 35 touchdowns; also had 28 carries for 245 yards and four touchdowns.  He also was the kicker for all kickoffs and field goals, along with most extra points and punts. Franks also led his team to a 13-2 record as a senior and reached the Class 5A State Championship Game.

Although he struggled in the 2016 spring game Franks says he has come a long way since then. He says he uses the spring game footage to review his plays and learn from his mistakes. Franks says confidence is key when it comes to leading his team.

Franks came to Florida as an early enrollee, after an unexpected flip from a longtime verbal commit to LSU.

Admission to the Orange & Blue Debut is free.

@clesousky1
Previous Player Feature: Devin Robinson
Next Xavier Looking For Another Upset As They Face Arizona