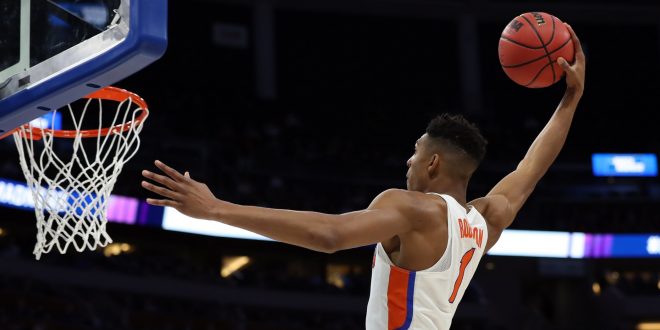 Junior forward Devin Robinson is hitting his stride at the perfect time, as the Florida Men’s Basketball team heads into the Sweet Sixteen.

Just two years ago, Robinson and his teammates watched the NCAA Tournament after finishing with a 16-17 record in the 2014-2015 season.  Soon after, the

Gator players learned that after 19 years, head coach Billy Donovan was leaving. He’d accepted the offer from the Oklahoma City Thunder to be ahead coach in the NBA.  Doubts loomed around the locker room, as most of the players had committed to play for the legendary basketball coach.  Most of the team was shocked, especially because they knew so little about Mike White.  Robinson says his faith in Coach Donovan helped him accept his new coach.

After four years at the helm of the Louisiana Tech, Mike White proved he was up to the challenge to follow Billy Donovan.  The Gators improved to 21-15 in the 2015-2016 season, and played in the NIT.  Robinson says his relationship with White improved throughout that first season.  That confidence in his coach has only improved this season as the Gators are still dancing into the Sweet 16.  White never reached the tournament in his tenure with LaTech, and is the first coach in UF history to get the Gators to the NCAA Tournament in his second season.

As the season progressed, Robinson decided defense would be his focus.  With a legacy of top defenders behind him, Robinson says he decided to concentrate on improving his defensive skill set in order to set he and his team apart.

And improve he did.  Heading into last Saturday’s match up against Virginia, most people predicted the Cavaliers defense had the power to stifle the Gators.  Instead, it was Florida’s defensive performance that held Virginia to just 39 points.  Robinson and senior teammate Justin Leon both posted double doubles that night.  Robinson scored 14 points and grabbed a season-high 11 rebounds.  While the Gators are without starting center John Egbunu, Robinson has certainly stepped up in the “grabbing the ball off the glass” department.

Heading into the Sweet 16, the Gators (26-8) understand their team dynamic.  Robinson says the Gators’ early battles this season give them assurance that they can beat just about anyone.  Wisconsin has tallied more NCAA Tournament wins than any other school over the last four years.  The Badgers (27-9) are coming off of the biggest upset of the tournament so far: an eighth- seed defeating defending champion Villanova.  Robinson is hoping to put his improved defensive skills on display, as he says Friday’s game will be a defensive challenge.

Florida faces Wisconsin in the Sweet 16 Friday at 9:59 pm in New York City.