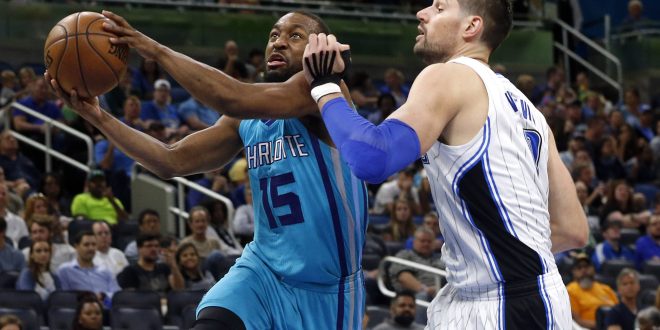 The Orlando Magic fall apart in the fourth quarter against the Charlotte Hornets to lose 109-102 Wednesday night at home. The Magic end their season series against the Hornets with a 0-4 record. The Hornets outscored the Magic by 80 points in the first three games. Terrence Ross led the team in scoring with 19 points while Nikola Vucevic finished with his 32nd double-double including 14 points and 12 rebounds. Kemba Walker continues to be a threat after finishing with 22 points and seven assists. Orlando’s two-game win streak tied their best run of the season. Ironically, the Hornets ended the last Magic win streak back in December.

Comfortable Lead in First Half

Orlando were up six points before eventually going up by as much as 10 in the third quarter. A big plus of the Magic lead included shooting 45.5 percent from the floor during the game, but Charlotte finished the game at 46.7 percent. The Magic were happy heading into the locker room that they may achieve their first three game win streak. However, 14 turnovers by the Magic also gave Charlotte another four possessions to work with that could have been the difference maker in the game. Orlando could not hit double-digit points at the free throw line, having eight less points than the Hornets.  On the other hand, the first half lead is also a result of both Evan Fournier and Elfrid Payton providing a combined 30 points and eight assists (a lot being in the first 24 minutes). The Magic were content with their defensive performance because of their success on offense.

Hornets Buzz to a Win in Second Half

The Hornets began the fourth quarter on a 13-7 run led by extraordinary shooting from Frank Kaminsky and Kemba Walker. Kaminsky’s ability to be versatile by stretching the floor gave Bismack Biyombo problems defending him. Kaminsky shot three of four from beyond the arc, all three coming in the last 12 minutes. Walker’s scoring efficiency and ability to move the ball due to his quickness went into full effect in the fourth quarter with eight points and three assists. Frank Vogel’s team attempted to exploit the Hornets poor defending of the three point line by shooting 40 threes (a season high) and making 14, but it was not enough to stop the buzz.

Nikola Vucevic thinks the team had a lot of good possessions on offense but could not hit all their shots.

Orlando falls to 19-10 when leading after three quarters of play and 3-7 in their last 10 games. At least Magic fans got to see Aaron ‘Air’ Gordon slam home a highlight dunk with one minute left in the game to spare.

The Orlando Magic remain at home to play the Detroit Pistons this Friday. Frank Vogel’s team is far out of contention from a playoff spot. However,  the Pistons are battling with the Miami Heat, Chicago Bulls, Milwaukee Bucks, and the Indiana Pacers for the bottom spots of the Eastern Conference. Therefore, the Pistons will want to find their form in the remaining games of the season to escape the 10th spot after losing their last two games. Maintaining stability within the paint will be a key focus for Orlando with Andre Drummond and company the fifth best rebounding team in the NBA at 45.3 per game. Nikola Vucevic and Bismack Biyombo will need to step up down low to raise hope for the Magic.