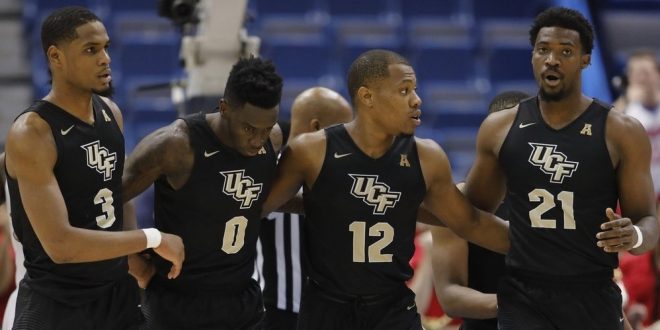 University of Central Florida defeated Illinois 68-58 last night to advance to the final four of the NIT. The Knights will now head to New York to play in the program’s first NIT semifinals at Madison Square Garden.

No. 4 seeded UCF was supposed to head to Illinois, but with a stadium conflict the No. 2 seeded Fighting Illini couldn’t host the game. As a result, the Knights filled their arena with it’s first sellout crowd.

Head coach of the Knights, Johnny Dawkins, says the crowd at CFE arena was a major factor in the victory.

"We couldn't have done it without (the fans)." – Johnny Dawkins

Both teams had five 3-pointers in the first half, but Illinois only had two other baskets. The Fighting Illini’s shot 7 for 26 and ended the first half falling behind at 34-19.

Dawkins says he told his players at halftime not to take the foot off the gas.

UCF continued to rally in the second half, leading by 19. But, Illinois’ Malcom Hill who hit back-to-back 3-pointers and made three-free throws to cut the deficit to six. Hill had 29 points to finish off his Illini career.

The UCF Knights will now head to the Big Apple to play against No.7 TCU in the NIT Final Four Tuesday. Tip-off is set for 9.