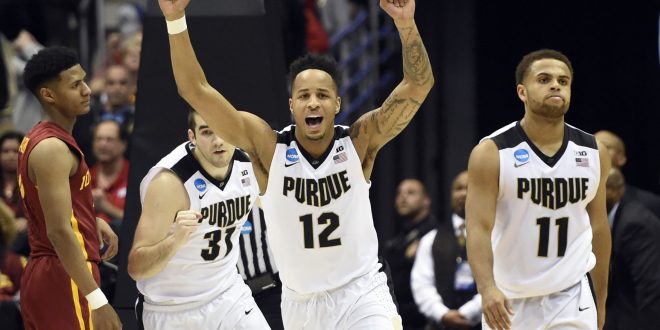 The No.1 seed Kansas Jayhawks (30-4) will take on the No. 4 seed Purdue Boilermakers (27-7) for a Midwest region battle in the Sweet 16 of the NCAA Tournament Thursday night. The Jayhawks are in luck tonight as the game will at the Sprint Center in Kansas City, Missouri. Even though the game is listed as a neutral-site game, the Jayhawks will have a home-court advantage as the arena is only an hour from their usual home.

Kansas head coach Bill Self hopes being in the area will be a bonus for the Jayhawks. Both the Jayhawks and the Boilermakers won their regular season conference titles, the Big 12 and the Big Ten, respectively, by multiple games. According to ESPN’s Basketball Power Index, Purdue has a 43.7 percent chance of winning, while Kansas has a 56.3 percent chance. Tip off for the game is set for 9:39 p.m.

In the last round of the tournament, the Jayhawks defeated the Michigan State Spartans, 90-70. Head coach Bill Self is looking forward to the challenge of facing Purdue. Throughout the season and the tournament, the majority of Kansas’ points have come from their four guards. Senior guard Frank Mason III is their leading scorer and the top scorer in the Big 12, with an average of 20.8 points per game.

Following Mason is freshman Josh Jackson, junior Devonte’ Graham, and Junior Sviatoslav Mykhailiuk who score an average of 16.6, 13.3, and 9.7 points per game, respectively.

Head coach Matt Painter says the team is excited for their matchup against Kansas this week. The Boilermakers are coming off a 80-76 win last week against the Iowa State Cyclones. Their biggest challenge is going to be keeping up with Kansas’ defense. Purdue’s offense needs to be on their game in order to get some points on the board. Painter says our players will be in trouble if they give Kansas space in their one-on-one’s. However, Kansas will need to be on the lookout for sophomore forward Caleb Swanigan in tonight’s game. Purdue’s Swanigan is a national player of the year candidate and Purdue’s leading scorer. He averages 18.5 points per game and 12.6 rebounds for game.

The Boilermakers also have junior forward Vince Edwards and junior Isaac Haas, who average 12.7 and 12.6 points per game, respectively.

The winner of tonight’s game will advance to the Elite Eight where they will play either the Oregon Ducks or the Michigan Wolverines for the Midwest region championship.

Sydney is a senior studying telecommunications with a specialization in sports media at the University of Florida. She is a multimedia sports reporter for ESPN 98.1 FM/850 AM WRUF and WUFT-TV.
Previous From Guaranteed Lottery to Playoff Contender: What Exactly Happened in Miami?
Next No.12 Gator Baseball Returns Home to Host No.4 LSU In SEC Showdown