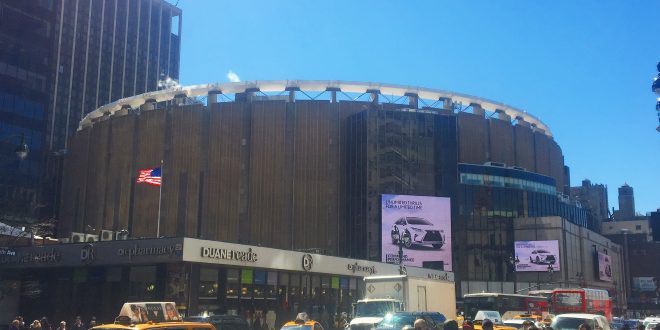 Chris Chiozza’s game-winning floater, capping off an all-time classic NCAA Tournament game, will be remembered by Florida Gator fans forever. For Madison Square Garden, it’s now one of many famous nights that make 4 Pennsylvania Plaza the Mecca of Basketball.

While MSG currently hosts the Rangers, Knicks, St. John’s basketball and the New York Liberty of the WNBA, so many miracles and memorable moments have happened at “the world’s most famous arena.” In boxing, it’s where the “Fight of the Century” between Muhammad Ali and Joe Frazier happened and the ensuing match, dubbed Ali-Frazier II, occurred.

For the Rangers, it’s where Wayne Gretzky announced that he would be officially retiring from the game of hockey, sending the great one to “hockey heaven.” It’s also where the blue shirts won their first Stanley Cup since 1939, taking down the Vancouver Canucks in seven games in 1994.

MSG’s other original tenants, the New York Knicks, have had their fair share of basketball history on their home court as well. In 1970, it’s where the Knickerbockers won their first NBA Championship, as the infamous squad of Willis Reed, Dave DeBusschere, Walt Frazier and Bill Bradley took down their arch rivals, the Los Angeles Lakers.

A Stage for Everything

Bing Crosby and Bobe Hope held their “Saltue to the USO” in the Garden’s re-opening year, while Marilyn Monroe sang her famous “Happy Birthday” rendition to JFK there in 1962. Elvis Pressley sold out four shows at MSG in 1972 and John Lennon performed his last ever concert there, featuring Elton John, in 1974.

This place is pretty cool pic.twitter.com/kQkW7KbJLt

Whether you’re courtside, on the Chase Bridge on the 300 level of the arena or way up in the rafters, there’s not a bad seat in the house. Way up top, you can see all of the Knicks’ and Rangers’ retired jerseys, along with championship banners spanning all the way back to the 1950s. Down on the floor, you’ll get to touch the court that Patrick Ewing, Walt Frazier and now Chris Chiozza have blessed with their talent. It may not be the biggest arena or the most recently renovated, but there’s a reason it’s known as “The World’s Most Famous Arena.”