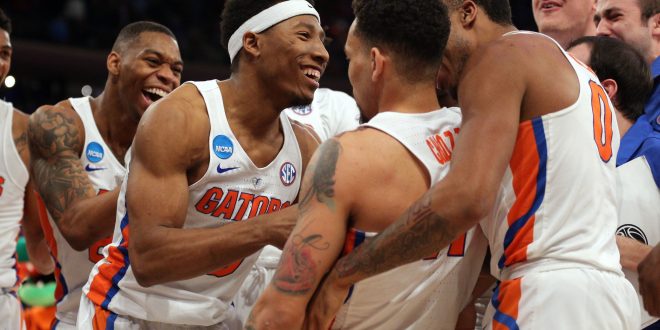 Florida Advances to Fifth Elite Eight in Seven Years After Taking Down Wisconsin, 84-83

Chris Chiozza was the last man standing on Saturday night at Madison Square Garden. As time expired, the junior guard hit the game-winning floater from beyond the arc to send the Florida Gators to their first Elite 8 since the Billy Donovan Era, and their fifth in the last seven years.

While Chiozza finished the game with eight points, five assists and four rebounds, it was KeVaughn Allen who had a record-setting performance. Allen ended the contest with 35 points, a career-high for him, and a Florida Gator NCAA Tournament record, on 11-of-24 shooting, while going 9-of-10 from the charity stripe. He hit six of his final eight shots to end the game.

It seemed as if Zak Showalter’s game-tying floater, contested by Chris Chiozza, would be the story of the game, as it capped an 8-0 run to send the game into overtime, but Chiozza decided he would have the final word. The shot was the first buzzer-beater for Florida in the NCAA Tournament since Mike Miller’s against Butler in 2000. The Gators were outshot 51 percent to 45 percent from the floor and 41 percent to 36percent from beyond the arc.

UF’s bench outscored Wisconsin’s 20-3, as Canyon Barry and Chris Chiozza added valuable minutes off the bench. A game-saving block with 34 seconds left in OT, which would’ve given the Badgers a four-point lead, encapsulated the Gators’ comeback spirit in a single play. Florida will take on South Carolina in the Elite 8 on Sunday at 2:20 p.m. at Madison Square Garden. The SEC has three teams in the Elite 8, the most of any conference.

Florida: 7th Elite 8 appearance since 2006; tied with North Carolina for most over that span

Wisconsin hit four of their first six shots including a Bronson Koenig contested three-pointer and a three point play by Ethan Happ to take a 14-10 lead with 15:30 remaining in the half. The Gators went two and a half minutes without a basket during the stretch.

With just over six minutes played, it was more of the same for the Badgers. Wisconsin went on a 13-2, 3:41 run to take a 10-point lead with 13:25 remaining. Happ’s ability as a post-passer prevailed, notching three assists in the first six and a half minutes. The Badgers also made six of their first eight shots, while UF missed eight of their first 11.

Nigel Hayes continued his efficient offense, scoring nine points on his first six shots. The Badgers led by nine with 8:30 left in the first frame.

A 10-3 run brought Florida back within two with fewer than two minutes remaining in the first 20 minutes. Ethan Happ then fouled KeVaughn Allen on a deep three-point attempt, sending Allen to the charity stripe for three shots. He sunk all three giving Florida its first lead of the game with 1:15 left in the half.

The Gators took a 34-32 lead into halftime thanks to KeVaughn Allen’s basketball IQ. He hit six free throws in the final 1:18 of the half after getting fouled twice on shots from beyond the arc. He led all players with 15 points, despite shooting 4 of 12 in the first frame.

Nigel Hayes led Wisconsin in the first half with nine points, but only played 13 minutes. Despite trailing by two, the Badgers shot 52 percent from the field and 57 percent from beyond the arc. Their Achilles’ heel was what it had been all season, free throw shooting. Wisconsin went 4-of-8 from the charity stripe. They had nine turnovers, leading to seven points for the Gators.

Both teams had eight assists in the first half, but Florida had a one rebound lead. The Gators also led in first frame points in the paint, 14-10. UF led for only 2:58 of the first 20 minutes.

Florida went on an 11-3 run out of the half, taking an eight-point lead with 16:17 left in the game, their largest lead of the contest up to that point.

The Gators took a 10-point lead on a Kasey Hill mid-range jumper with just over 15 minutes left in the game. Florida made five shots in a row to take the double-digit lead.

A 12-1 run put Wisconsin back up by one with 10:21 left in the game. The Badgers took the lead on a Nigel Hayes basket and foul shot.

A quick 9-0 run of their own put Florida up by eight with 8:31 left in the game. A Chris Chiozza three-pointer paired with a Canyon Barry three point play helped the Gators swing momentum.

KeVaughn Allen continued his obliteration of the Badgers in the second half, sinking his first six shots of the final frame, including two from long range. He tied his career-high of 32 points with 6:10 remaining in the game on a jump shot. Florida led by 12 with just over five minutes left in the contest.

The Gators led by six points with 1:44 left in the game, but failed to hit a shot for over four minutes.

With 2.5 seconds left, Zak Showalter made magic happen. He capped an 8-0 run off with a floater from the three-point line to tie the game up at 72. The shot sent the contest into overtime.

A Canyon Barry block on a Khalil Iverson breakaway layup might have saved the game. The play led to a Chris Chiozza lay-up to tie the game at 81 with 24 seconds remaining in the overtime period.

In an insane turn of events, the Gators hit their final four shots and won the game on the shot from Chiozza.

Florida will take on the South Carolina Gamecocks for the third time this season on Sunday at 2:20 p.m. at Madison Square Garden. The teams split the first two match-ups, each winning a game at home. You can hear the game live on Country 103-7 The Gator with the winner going to the Final Four.