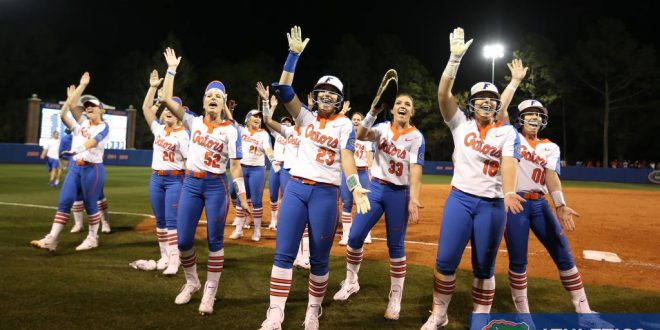 The second ranked Florida softball team takes the series from number four Auburn with a 7-0 win Sunday night in Gainesville.  Florida has taken the first two games of the series and is now 29-1 overall and 7-0 in SEC play.  This is the 20th shutout victory for the Gators this season and their 21st consecutive win.

Kelly Barnhill dominated the night as she started in the circle for the Gators and had a season high 16 strikeouts. She only allowed two hits.

Barnhill wasn’t the only one on fire for the Gators; Florida’s offense had a tremendous night as they scored seven runs, had nine hits and the defense made no errors.

Florida was able to jump out early in the second inning with a single up the middle from senior Chelsea Herndon which allowed junior Aleshia Ocasio to score. In the fourth, Ocasio doubled and Herndon later brought her home with a sacrifice fly to give the Gators a 2-0 lead.

During the fifth inning the Gators put the game away, scoring five runs.  Herndon again was in the middle of things, as she ended the night with two hits and four RBI.  Here’s a quick look at how it all went down.

After the game Gator coach Tim Walton had a few words to say on Barnhill’s incredible pitching.

The Gators will play the Tigers on Monday in the series finale and try for the sweep.  From there the Gators will prepare to take on Bethune-Cookman on Wednesday in Gainesville.