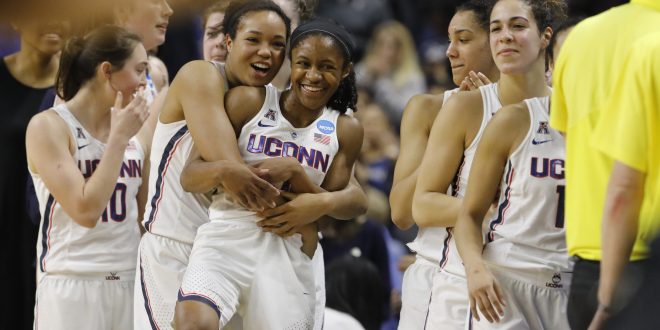 Geno Auriemma and the UConn Huskies women’s basketball team are in the Final Four again. Should it be a surprise, though? This is the Huskies tenth straight trip to the NCAA Women’s Basketball Tournament’s Final Four and, as usual, they made it look simple.

The Huskies are pursuing their twelfth NCAA championship in what would be their fifth straight. Just like last season, UConn is sporting an undefeated regular season. UConn is averaging 96.5 ppg so far in the tournament.

UConn came out just as strong as expected in this year’s tournament. In the Huskies’ first four rounds, they provedyou could not mess around with them.

Boasting the No.1 seed in the Bridgeport Region, UConn dominated their four opponents. In their normal display of dominance, the Huskies defeated Albany in the first round, 116-55. Five Huskies played for double digit points, including sophomore forward Napheesa Collier and junior guard Kia Nurse, who shots for 24 points a piece. Collier also tied with junior forward Gabby Williams for most rebounds in the game, going up for 10.

Kia Nurse continued her strong offensive play in the second round, where her 29 points propelled UConn passed last year runner-ups Syracuse, 94-64. Including Nurse, four Huskies scored in the double-digits, as they dismantled a Syracuse team that defeated their first round opponents by 20.

Napheesa Collier proved to be UConn’s most consistent player so far in Monday night’s game. Collier played for 34 minutes, adding 28 points and 12 rebounds to her team’s 90-52 win against the Oregon Ducks. Not to be outdone, Gabby Williams put up 25 points to help seal the win and propel the UConn’s to their eighteenth straight Final Four appearance.

Marching on! The Huskies are headed to their 10th consecutive Final Four! #AndCounting #UConnNation pic.twitter.com/lBZ71qb6y8

The Huskies Road to Team MVP

This year’s Connecticut team is a well balanced team. The starting five have all played more than 24 minutes in each game. In at least two of the four games, the starting five players have individually scored in the double-digits.

Right behind her in points is Gabby Williams with 85 and Kia Nurse with 73. Williams has scored in the double digits in all four games of the tournament so far, while Nurse has double-digit points in three of the four games.

Sophomore forward Katie Lou Samuelson is also having an impressive 2017 NCAA Tournament run. The forward has put up 61 points so far, and the only time where she didn’t double-digit numbers is the game against Oregon. In her NCAA Tournament run, senior guard Saniya Chong is proving she’s not done yet. The guard is an all-around player, putting up numbers in the paint, from behind the three, and adding assists and rebounds to UConn’s arsenal.

Of the 386 points the Huskies have scored in this year’s Tournament run, 348 were made my the starting five. All-in-all, the Huskies are continue to prove to be an all-around team that equally contribute to their wins.

Mississippi State, South Carolina, and Stanford are the other fortunate teams to make it to this year’s Final Four. South Carolina faces Stanford for their shot to the Championship.

The only thing standing in the way of UConn and the Championship game is Mississippi State. The Bulldogs have gone an impressive post-season run of their own, defeating Oklahoma City region’s No.1 team Baylor 94-85 for a spot in the Final Four.