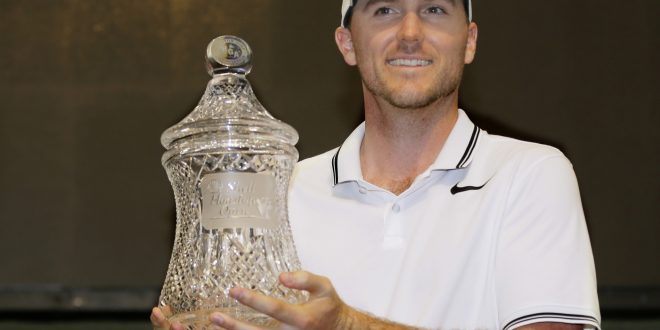 In the 11th hour, Russell Henley earned the last Masters invitation up for grabs on Sunday when he made it back in the winner’s circle at the Shell Houston Open after shooting a final round 65 (-7).  The ten birdies on the day propelled Henley to his first win on tour since his 2014 Honda Classic Victory, and third of his career.

The former Georgia Bulldog was off to a promising start in his rookie season on the PGA TOUR.  He won his first event as a card holder, the 2013 Sony Open in Hawaii, becoming the first player in 12 years to do so.  After earning two wins in two season, Henley looked like one of the best young players on Tour.  However, that was short lived after he struggled the following seasons.

In 2016, Henley missed 12 out of 25 cuts.  That included five consecutive cuts missed leading up to the Shell Houston Open, where Henley finished in a tie for fifth, his best finish that season.

Henley brought last year’s good finish and momentum into this year’s tournament.  He’s having a better season, only missing two cuts in 11 starts.  This win earned the former Bulldog a Masters Invite.  His past struggles did not hold him back this year as he began to find his swing and game once again.  He shot rounds of 67-67-69-65 to finish the tournament at 20-under.

Henley will head to his home state of Georgia for the Masters Invitational at Augusta National Golf Club.  First round begins Thursday, April 6.