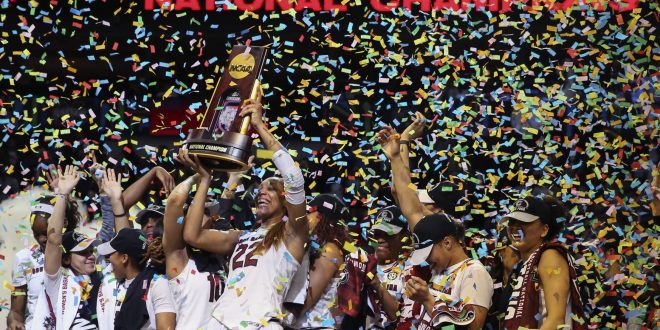 For the first time in school history, South Carolina is the national champion in women’s basketball. They defeated Mississippi State 67-55 Sunday night in Dallas. Coach Dawn Stanley put on her championship cap proudly, as she won the title she waited her whole career to earn. Stanley and her team were showered in confetti and celebrated their win after making history.

Previously, UConn had won the title for five consecutive years. When Mississippi State defeated UConn in the semifinals, it meant that there would be a new winner of the championship title for the first time in half a decade.

For both teams, it was their first appearance in the tournament’s title game. Mississippi State led for the majority of the first quarter, where they jumped out in the very beginning with a 7-1 lead. In the last 24 second of the first quarter, South Carolina turned that lead around and ended the quarter ahead 18-14. In the second quarter, the Gamecocks pulled ahead and went into the locker room at the half with a 10-point lead. During the third and fourth quarters, Mississippi State brought the game within 4 points several times, but South Carolina held them off every run.

When the buzzer sounded at the end of the fourth, the Gamecocks had pulled their lead to 12 points to finish the championship game. The Gamecock A’ja Wilson took over the game in the fourth quarter; blocking shots, grabbing rebounds, and scoring 9 points in that quarter alone. She had 23 points and 10 rebounds in the game. Guard Allisha Gray had 18 points and 10 rebounds Sunday night.

Dawn Stanley is now the second African American coach to win a title since the NCAA started sponsoring the women’s basketball tournament in 1982. She went with Virginia to the Women’s Final Four three times in 1990-92, but she never won a NCAA title. When she came to coach at South Carolina, they were no powerhouse, but Stanley saw potential. Her first two seasons started off slow, but her dedication to the team brought the breakthrough, now creating a national champion team.