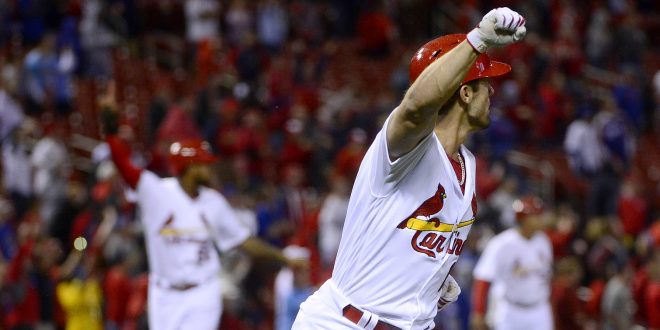 Excitement filled the air as the opening weekend in Major League Baseball was set to begin. Fresh off a 2016 World Series championship and first title since 1908, the Chicago Cubs were eager to start the 2017 season with a victory. Yet, thanks to their division rival St. Louis Cardinals, the Cubs would fall in heart-breaking fashion on the road.

In a game that featured two of the league’s top pitchers, the play on the mound did not disappoint. Cardinals starter Carlos Martinez came out firing on all cylinders. Martinez would throw for 7.1 scoreless innings, striking out 10 batters along the way.

Meanwhile, Cubs starter Jon Lester would have a strong performance as well. Lester would pitch for five solid innings, allowing just one run and striking out seven batters.

Trailing 3-0 in the top of the ninth, the Cubs would rally late. Catcher Willson Contreras would blast a three-run homer to left field, tying the game at 3-3.

Willson Contreras ties the game with a 3 run HR in the 9th. Willson is a special kind of player. So much passion. pic.twitter.com/WLK3PzhEXQ

With the game slipping away, the Cardinals were in need of a spark. With two outs and bases loaded in the bottom of the ninth, Cardinals center fielder Randal Grichuk hit a walk-off single to left field. The hit would drive in left fielder Jose Martinez, securing a 4-3 victory over the defending world champions.

The Cardinals win on a walk-off RBI against the defending World Series champs. pic.twitter.com/811CBQV9tX

Putting the difficult loss in the past, the Cubs will look to bounce back quickly. The team will square off in the second game of their series against the Cardinals tomorrow night at 8:15 p.m. ET. The 2015 National League Cy Young Award winner Jake Arrieta will start on the mound for the Cubs. Meanwhile, three-time all-star Adam Wainwright will get the start for the Cardinals.