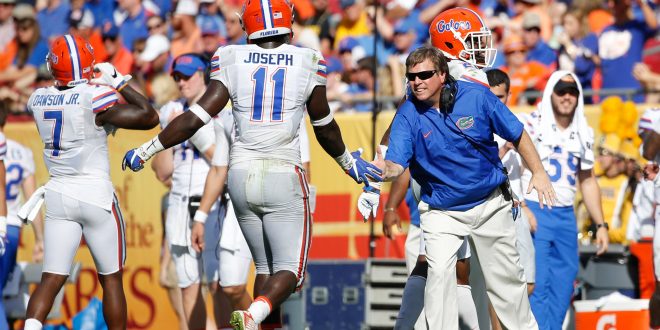 Young Gator Linebacker Group Looking to Step Up in 2017

With a number of key players leaving, Florida’s linebacker group will look quite different this year from last year. Young players will need to step up into leadership roles in order to continue Florida’s tradition as a defensive powerhouse.

Linebackers coach Tim Skipper talked about how tough it will be to replace the linebackers who are leaving the team. Two notable guys leaving are Alex Anzalone and Jarrad Davis. Anzalone was a four-star recruit who was sidelined for most of his college career due to injuries, but showed flashes of brilliance when he was on the field. Jarrad Davis was only a three-star recruit coming out of high school but eventually developed into an anchor for Florida’s defense with a combined 154 tackles and 17 tackles for loss his last two seasons.

Skipper also said that David Reese, who is considered to be a vocal leader, is still recovering from wrist surgery. Reese was a three-star recruit coming out of high school, per 247sports. When injuries started to pile up for the Gator defense, Reese stepped up and showed what he’s capable of, averaging 8.5 tackles per game in a four-game stretch. However, with Reese out, it’ll be tough to evaluate who Florida’s leader at linebacker will be. But that’s exactly what the Orange and Blue spring game will help determine.

Linebackers to look out for in the spring game

Florida has plenty of linebackers who are capable of stepping into a leadership role. Vosean Joseph showed potential last year when he had a bone-crushing hit on LSU quarterback Danny Etling to prevent him from getting a touchdown. He also had a very solid game in the Outback Bowl against Iowa with six tackles and a pass defended. Kylan Johnson averaged only 3.9 tackles per game but flashed his potential when he averaged a solid six tackles per game in five games.

During the 2017 recruiting cycle, the Gators snatched up three linebacker commits: Ventell Miller, Nick Smith and Lacedrick Brunson. Miller and Smith were both three-star recruits while Brunson was a two-star recruit, per 247sports. With Florida lacking depth at the linebacker position, it is very possible that any of these upcoming freshmen end up being starters.

Davis and Anzalone talk about their pro days

Full story on Jarrad Davis' spotlight-stealing performance at #Gators' Pro Day and his hopes for the NFL Draft: https://t.co/WT2PzUQpbQ