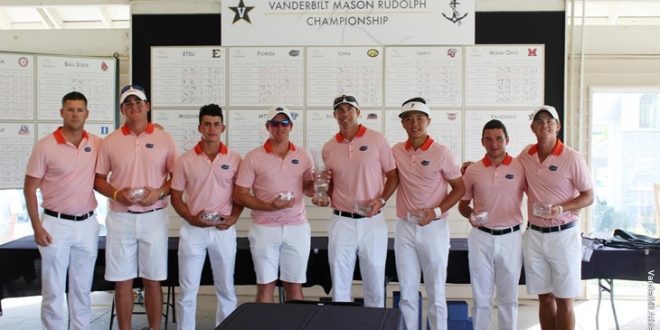 Men’s Gator Golf Makes its Mark in the Mason Rudolph

Vanderbilt University (No. 1) welcomed 13 teams over the weekend as they hosted the Mason Rudolph Championship. The visiting teams included 3 Top-25 teams as well as 4 SEC teams. Last year, the Florida Gators finished in second place in the Mason. Heading into the tournament, the Gators (No. 4) looked to improve on last year’s performance.

A Performance For the Books

The Florida team did just that as they managed to earn their fifth team title of the year on Sunday. This is just the eighth time in University of Florida’s golf history that the Gators have won five events in a season. The team’s 822 (-30) is the best score they have achieved this year. Head coach JC Deacon is pleased with his team’s performance both individually and as a whole.

Despite a slow start, Deacon never doubted that his team was going to win the tournament. He describes his team as a “championship team” and appreciates that their hard work in practice pays off. The key to Florida’s success is playing their best at the right time, which is exactly what they did this past weekend. As a coach, Deacon’s pride felt towards his team’s accomplishments is clear.

While the entire team contributed to the win, a few players stood out. Sophomores Sam Horsfield and Gordon Neale plus junior Alejandro Tosti came in the clutch. All three of them shot a 66 (-5) in the final round. Horsfield broke off the tie from second place in his final two holes. After executing two perfect shots on hole 17, he essentially took the tournament himself. If the team is in a position with the tournament on the line, Deacon hopes that matters would be placed in Sam’s hands. Like he did on Sunday, Deacon has confidence that Sam will pull through under such circumstances.

It was determined that Alejandro Tosti was to play in the Mason just a couple of days before the event. This ended up being a beneficial last minute decision for the Gators. Fifth on the lineup, Alejandro positively impacted the team throughout the tournament with both his attitude and performance. Talent wise, Deacon believes that there isn’t a player in the whole country who possesses more than Alejandro.

The Gators have a few weeks to rest after their big win this past weekend. They’ll be back in action at the SEC Championship on April 21 at the Seaside Course in St. Simons Island, Georgia. The Gators are expected to have a decent level of comfort with the course. The majority of the team has experience playing in the championship, with Andy Zhang being the only player who has never been. Deacon thinks his team is in a good place so long as they go and perform their best. That being said, the team could use the rest they’ll be given over the next few weeks. Deacon hopes the team will take advantage of the time off to watch the Masters Tournament and gain some motivation as a result.