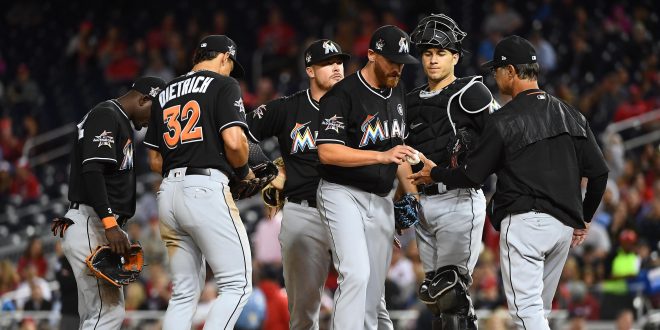 The Miami Marlins may have a new team owner in their future. But for now, the Marlins need to work on their game after losing to the Washington Nationals 6-4 in last night’s game. This is the Marlins second loss to the Nationals this week.

Nationals Ryan Zimmerman scored the first runs for Washington with a home run in the second inning. Washington then struck four runs in the fourth followed by a two-run single from Matt Wieters.

Nationals pitcher, Tanner Roark, made it even harder for the Marlins to recover. Roark retired 13 of the final 14 batters he faced.

Marlins J.T. Realmuto’s solo home run cut the Nationals lead to 6-3 in the top of the 7th inning.

Nationals Blake Treinen had two-out singles that drove in the Marlins’ fourth and final run of the night.

What’s Next for the Marlins

Miami Marlins manager Don Mattingly was asked before the game between the Washington Nationals about a report on FoxBusiness.com that said former Yankee Derek Jeter and former Florida governor Jeb Bush are interested in buying the Marlins.

Mattingly says that this change won’t make a difference in the Marlins play.

The Marlins and the Nationals will play their last game in the series today at 4:05 p.m.