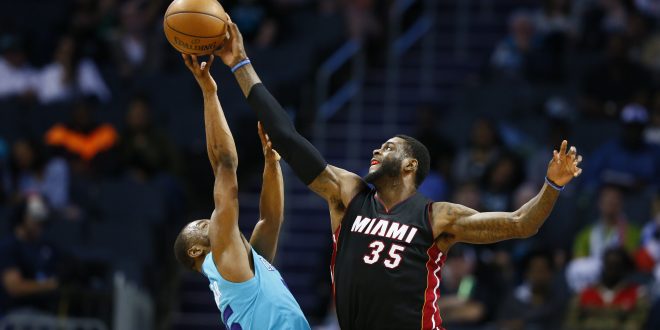 The Miami Heat were on fire against the Charlotte Hornets last night and hope to remain lit for the remainder of the regular season. The Miami Heat defeated the Charlotte Hornets 112-99 on the road last night to sit eighth in the Eastern Conference standings. The Chicago Bulls, Miami Heat, and the Indiana Pacers are all 38-40, fighting for the remaining two playoff spots. The Heat playoff push is defined by their 38 wins despite previously being 19 games under .500, but the absence of Dion Waiters and his clutch shots has been a problem. Miami is 5-5 in their last 10 games, even with all the success they have had in the second half of the season. Miami needs to find consistency by winning their last few games.

Everything from the game inside Spectrum Center until the very last game of the regular season for the Heat is about records. Hassan Whiteside made an outstanding comeback after a quiet first half that included three fouls and 14 scoreless minutes. However, the star center out-muscling Hornets center Cody Zeller with an elbow led to a confrontation including shoving each other. Zeller was charged with a foul and Whiteside added a technical foul into his game’s resume. This lead to Whiteside exploding to finish with 13 points, 20 points, and three blocks.

Nevertheless, the Miami Heat were the hottest they have ever been from behind the arc in history (21-40). Out of 27 first quarter points, 18 of them from three-pointers. Goran Dragic carried the motherload with 33 points and guards Tyler Johnson and Josh Richardson combined for 31 points, eight rebounds, and eight assists. James Johnson, who has been amazing for the Heat this season, earned his first start of the season and finished with 26 points, four rebounds, three assists, and two steals. The Miami Heat are the only team in the three-way tie with a positive point differential (1.0). Erik Spoelstra’s team is 7-7 in the division and 24-24 against Eastern Conference opponents.

"We knew they were going to pack the paint and those 3's would be open." -TJ pic.twitter.com/IcTH28Byh7

Miami have the hardest remaining schedule of the teams fighting for the last two playoff spots in the Eastern Conference. Erik Spoelstra’s squad get a ‘4 for 4’, but it is definitely not a Wendy’s fast food meal. The Heat have to face the top four teams in the Eastern Conference in their four remaining games. Miami controls their destiny after winning the season series with Indiana 2-1. However, Chicago have the easiest remaining schedule of the three and own the tiebreaker with the Heat losing twice to them this season. Can the Heat continue their playoff push despite their head-to-head record against the top?