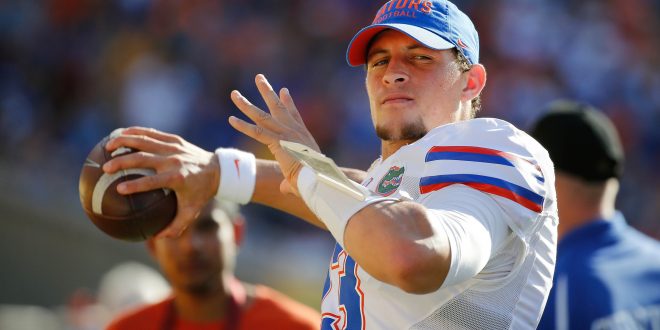 Spring Football Looks To Provide Clarity at Quarterback For Gators

On Friday April 7th at 7:30, the Gators will kick off their 2017 football season with their annual Orange and Blue game.  Gator fans are excited to see the Gators back on the gridiron with all eyes on the quarterback positon.  Gator sophomores Feleipe Franks and Kyle Trask are battling for the starting job.

Neither Franks nor Trask have taken a meaningful snap in a Gators uniform. Both quarterbacks were assigned the red shirt last season.  While neither entered a game, both agree that their full year of reps and practice within the Gator system has readied them to assume the starting role.

Feleipe Franks talent-wise has the most potential of any quarterback on the Gator roster.  The 6-6 219lb sophomore out of Wakulla High School has all the intangibles to be a good quarterback at this level.  Franks has the arm, the height, and the speed to be a difference maker inside and outside of the pocket.  The issues with Franks come with his understanding of the game, and familiarity with the offense.  These issues were evident last year during the Gators spring game, where Franks looked lost behind center.  Coming into this year’s game Franks said all he can do is learn from last year’s disappointing performance.

This is where the year of practice that Franks has should show up on the field. Franks said that his year of working in the system has helped him grow as a quarterback.  The offensive coordinator for the Gators Doug Nussmeier has seen a lot of improvement with Franks. Franks has improved as a student of the game.

Kyle Trask compared to Franks was a very lightly recruited quarterback out of Texas. Trask is a very accurate quarterback. Although throughout high school he had to fight for every rep.

Trask’s road to the University of Florida is an interesting one, as he wasn’t even on the radar of the coaches until defensive coach Randy Shannon alerted Doug Nussmeier that he needed to take a look at Trask.  Nussmeier liked what saw and Trask ended up being a Gator.

Interestingly enough it was Trask that had the better showing at last year’s spring game.  He showed much more presence in the pocket than Franks did and was able to make some plays down the field.  Although he had a good showing last year, Trask said that his presence at the line is one of the biggest improvements he has made in his red shirt year.

As of right now, headed into the Spring game the positon is still very much in flux.  Head coach Jim McElwain said in a press conference on Monday that the position is still “sorting itself out”.  He did although add that Franks has been taking most of the first team reps in practice over Trask.

With the spring game coming quick, Gators fans are chomping at the bit to get a sneak peak on who might be leading the Gators on the field this coming season.  Whoever the Gators decide is right to lead this team will have to be ready right away as the Gators will open their season in Dallas when they take on the Michigan Wolverines on September 2nd.