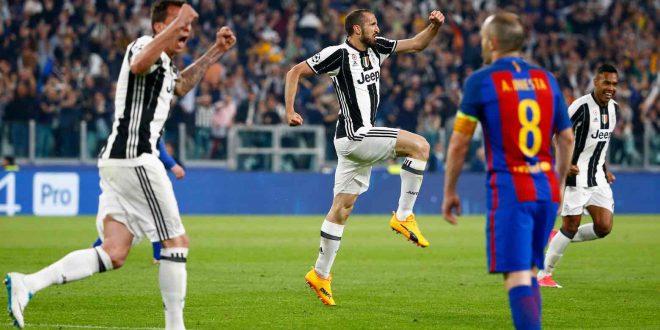 Spring is the most beautiful time of the year in the football world. It is when the Uefa Champions League enters into its nirvana moment. The European knock-out stages make fans reschedule their calendars. The football gods gave us the fortune to enjoy legs like the one between Juventus FC and FC Barcelona. Massimiliano Allegri’s squad made clear why they are part of the football elite after that incredible 3-0 victory.

There was a lot of uncertainty about which lineup Barcelona would use in this game. Sergio Busquets and Rafinha‘s injuries forced Barça to use the 4-3-3 scheme instead of the 3-4-3 scheme that has helped them since their 4-0 lost against PSG. Luis Enrique decided to use Jérémy Mathieu instead of Jordi Alba on the left-back. This movement prevented Barcelona from having fluidity when building plays from the back.

Juventus read Barcelona’s defensive issues perfectly. “The Old Lady” applied high pressure on Barcelona’s backline. Juan Cuadrado, Paulo Dybala, and Mario Mandžukić had a stellar performance on and off the ball. Each of them had specific defensive assignments: Cuadrado and Mandžukić cut the external-passing lanes of Barça by covering Mathieu and Sergi Roberto respectively; Dybala hovered around Javier Mascherano‘s ratio every time both Gerard Piqué or Samuel Umtiti tried to give him the ball.

Juventus punched first in less than 10 minutes. The duo Cuadrado-Dybala exploited the right wing majestically. Cuadrado took advantage of the wide space left by Mathieu in their one-on-one matchup. He dribbled and passed the ball to Dybala. Dybala had enough time and space to turn around and use his left foot to put the ball in the net.

Juventus immediately dropped lines after Dybala’s goal. It seemed like a conservative move at the beginning, but it was a perfect strategy by them. They allowed Barcelona to have the possession of the ball but blocked their passing lanes. It was like a horizontal ball-possession without pace. Lionel Messi had to drop lines to be the offensive nucleus of the team. The only clear chance for Barcelona came from an out-of-this-world through-pass by Messi to Andrés Iniesta. Gianluigi Buffon showed us one of his “The Curious Case of Benjamin Button” moment when he stopped Iniesta’s shot.

Juventus’s second goal came after that Buffon’s block. They designed a perfect counter-attack that had Mandžukić and Dybala as the protagonists. Mandžukić drove the ball through the left wing and beat Roberto to find Dybala inside the area. Dybala shot it right away to the left corner of the net.

Second Half: Lost Connection In Barcelona

Enrique felt the sense of urgency going into the second half. He made a substitution that, in theory, would have been the answer in solving Barcelona’s problems if they had the proper interpreter (Busquets). André Gomes came in substitution of Mathieu to be the center midfielder of the team – Mascherano dropped back to the defense. Barcelona switched to the 3-4-3 scheme. Assigning Gomes to be the genesis of Barcelona’s offense in those circumstances was not ideal. But injuries forced Enrique to make this move.

Eventually, Barcelona kept struggling on offense. The midfield was totally disconnected from the forwards and the defenders. The defensive brilliance of Giorgio Chiellini and Leonardo Bonucci was too much for Luis Suárez. Both Chiellini and Bonucci glued themselves to Suárez. They did not allow him to find open gaps or good shooting angles.

Juventus ended up closing the deal early in the 55th minute. Miralem Pjanić, a set-piece specialist, sent a beautiful, well-measured long pass to Chiellini that came from a corner. Chiellini beat Mascherano in a feisty battle to anticipate in the jump. Chiellini scored the header right to the right post. There is an important detail to take into account in this play: Suárez left the right post unguarded when he abandoned his position on the set-piece. If Suárez stays steady in that position, maybe it would have prevented Juventus’s third goal.

What Does this Result Mean?

This victory by Juventus should set the alarms to the rest of the teams in contention for the Champions League trophy. Juventus’s ability to reinvent themselves after losing their biggest stars for the past two summers is astonishing – Andrea Pirlo, Carlos Tevez, and Arturo Vidal left in 2015 while Paul Pogba left last summer. Allegri’s Juventus is probably the most underrated team in the world. Of course, both still have to play the second leg next week at the Camp Nou. And it is well known that Barça know something about making miraculous comebacks. But this time seems different. It seems like this rejuvenated Juventus is ready to fight for the pinnacle of European football once again.