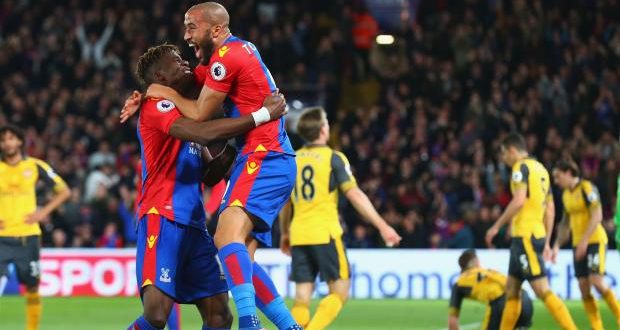 For the second straight week, Crystal Palace upset a fellow London inhabitant. After a shock 2-1 over Chelsea at Stamford Bridge last weekend, Sam Allardyce’s men defended their home turf, smacking Arsenal 3-0. The win is the first for Crystal Palace over Arsenal at Selhurst Park in nearly four decades.

Arsenal had a few chances to take the lead in the opening ten minutes. The biggest one was a swerving, outside-of-the-box shot from Mohamed Elneny, but Palace keeper Wayne Hennessy did well in diving to his right and palming the ball away.

That was one of 11 shots on the night for Arsenal, but only three of them were on target. The Palace midfield did an excellent job of pressing high up the pitch and not allowing Arsenal’s playmakers to have their usual time on the ball. In addition, Andros Townsend and Wilfried Zaha wreaked havoc all game long on the wings. This was no coincidence either, as this was the tactical plan of Allardyce.

Allardyce, per Sky Sports: “Tactically the players were aware of how to beat Arsenal. The first thing was to defend and frustrate them, keep them playing sideways, then use the space behind the full-backs. Arsenal have been weak defensively, they leave the centre-backs exposed.”

That defensive weakness showed at the 17th minute, with Zaha and Townsend combining to put the hosts in front.

The move started with Townsend laying the ball off for Yohan Cabaye near the edge of the box. With a rapidly retreating Arsenal back-line, Cabaye slipped in Zaha. Zaha stumbled but was able to send in a low cross from the right side of the box. Townsend beat his marker to cross and finished first-time from the edge of the six-yard box. The goal gave Zaha his second assist in as many games and sent the home crowd into a frenzy as their side had the lead.

Christian Benteke almost nabbed his second goal in a week to double the Palace lead just before halftime, but his near post rocket was saved by a strong right hand from third-choice Arsenal keeper Emiliano Martinez.

That second goal would come though and did so via the foot of Cabaye on 63 minutes.

Again it was the combination of Townsend, Zaha, and Cabaye teaming up for the score. Townsend played out wide to Zaha on the right flank. Zaha lifted his head and saw a solo Cabaye around the right corner of the box. Cabaye sliding, looping finish hung and curled in the air for a moment before finding the top left corner of the goal.

The win is a monumental three points for Allardyce’s side. They now sit six points clear of the relegation zone with 34 points and have a game in hand over 18th place Swansea who sit on 28 points.

Meanwhile, for Arsenal, the woes continue for Arsene Wenger and his men. They have just two wins in their past eight league games and now sit firmly in sixth place, seven points behind Manchester City for the final Champions League spot.