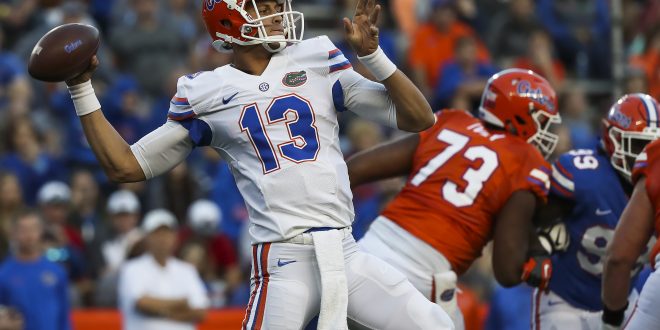 What To Expect From Florida’s O-Line

The Florida football team finished spring practice Friday night with the 2017 Orange and Blue Debut at Ben Hill Griffin Stadium. Now that spring camp is over and the opening game against Michigan is on the horizon, Florida’s offensive line is ready to put in some work.

The Gators offense is going to be under the microscope until the 2017 season kicks off, but the line is proving to one of the most improved. For the first time in a while, the O-line has some depth, at least on paper. A lot of players are back and the new offensive line coach Brad Davis is applying a new mentality and aggressive approach to his coaching style. Offensive lineman Fred Johnson is one guy fighting for a starting spot at guard.

Johnson says it is important to go out every day and prove himself.

The O-line struggled at the start of the Orange and Blue game, but made some positive adjustments when it came back for the second half. Head coach Jim McElwain hopes the depth and fierce competition will aid the entire unit.

McElwain says he is ready for the team to be explosive and stretch the field, especially as players come back from injuries.

A few new recruits were able to make it down to Gainesville to participate in spring camp, but the Gators will soon be able to capitalize on a full roster as the 2017 recruiting class enters this summer.

Johnson says once everyone starts learning on the same page, it will allow the team to lock in their depth.

Four starters are returning to the line and two capable quarterbacks, Feleipe Franks and Kyle Trask, are fighting for the role to direct the Gators’ offense. Redshirt freshman Feleipe Franks guided his team to victory on Friday and seems to be in the lead to take the starting job come fall.

Johnson says Franks grew a lot, knows the playbook and is trying to prevent himself from making the same errors twice.

Although Franks only completed 75 percent of his passes in the 2016 spring game, he limited mistakes during this year’s go-around.

Johnson says it’s great to see someone like Franks emerge and hold the position.

There is still a lot to be done before Sept. 2 when the Gators will take on the Wolverines in the season opener in Texas, but the offensive line’s performance thus far can be encouraging for Florida fans.