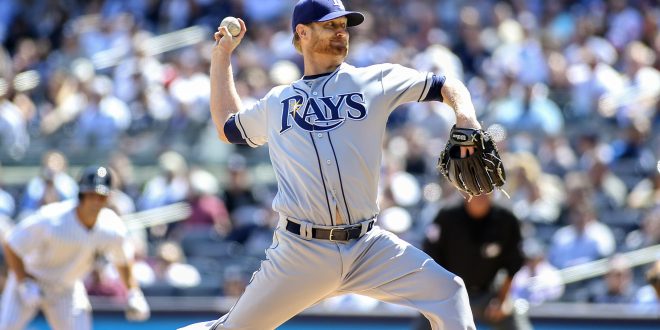 Rays Nearly Shut Out in First Away Game of Season

With the 2017 MLB season in full swing, the Tampa Bay Rays found themselves in Yankee Stadium yesterday afternoon. It was an outing to forget for the Rays as they were unable to get a man on base until the seventh inning. Yankees starting pitcher Michael Pineda dominated throughout 7 2/3 innings worth of work. Meanwhile, New York had an explosion of offense down the stretch leading to an 8-1 Tampa loss.

Tampa right-hander Alex Cobb got the start for the Rays yesterday and held his ground until late in the game. In his last outing against the Yankees he delivered 5 2/3 innings, and made them count only allowing four hits and one run. Cobb left the day with his first win of the season, and delivered Pineda his first loss. However, yesterday’s home opener for New York played out a little differently.

The Yankees delivered the first strike of the day in the bottom of the third. New York outfielder Brett Gardner reached first after a wild pitch from Cobb. Although Gardner struck out, the outfielder is well known for his speed and showed it off on the next play. Yankee outfielder Jacoby Ellsbury knocked a double into right, scoring Gardner.

Tampa trailed New York for the rest of the day as they were locked out of the game by Pineda. Cobb surrendered a solo home run to Yankee outfielder Aaron Judge in the following inning. Later in the seventh New York third baseman Chase Headly found himself going yard against Cobb too.

While momentum loomed in favor of the Yankees for most of the game, the Rays cut the three run lead to two in the top of the eighth. Pineda conceded a solo shot to Tampa’s first baseman Logan Morrison.

Although the game stayed close up until the eighth, the New York would rally for a scoring parade after a defensive error by Tampa. Gardner reached first after an infield error, and proceeded to demonstrate his threatening speed by stealing second, and then third. The outfielder scored after designated hitter Matt Holliday doubled to deep center.

Austin Pruitt relived Cobb right after. But Tampa would be unable to stem the bleeding until the score was 8 to 1.

What’s Next for Rays

It was a disappointing day for the Rays’ bats. With Pineda doing the heavy lifting for the Yankees yesterday, New York’s bullpen finished the day without surrendering any hits. Only two batters found their way on base. One was Morrison’s home run, and the other is when Tampa third baseman Evan Longoria doubled to left, spoiling Pineda’s perfect game in the top of the seventh.

Tampa will have a chance to redeem themselves tomorrow afternoon. After four meetings so far, the season series between these two AL East competitors is even at 2-2. Blake Snell will take the mound tomorrow for the Rays, while Jordan Montgomery makes his major league debut for the Yankees.

Previous Gator Baseball Vying for Season Sweep vs. FSU
Next What To Expect From Florida’s O-Line