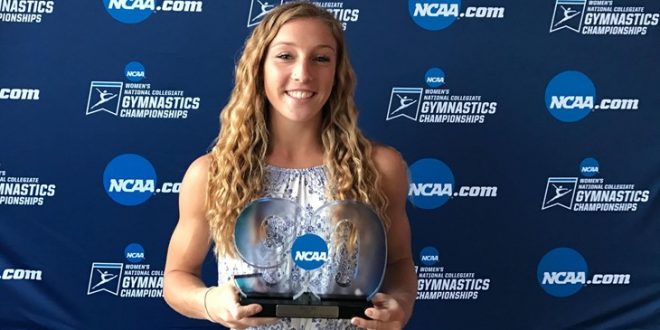 Junior Alex McMurtry is the first Gator of any sport to claim the 2017 NCAA Elite 90 Award. The award honors those who have high achievement in both athletic and academic fields.

Life as a Gator Gymnast

McMurtry was recruited to the team as just a senior in high school. Now, in addition to the Elite 90 Award, she also became the first Gator to be a SEC Gymnast and Scholar-Athlete in the same season. She says she didn’t believe she was ready to come here as a 17-year-old freshman.

However, McMurtry’s success as a student-athlete has proved otherwise. She currently has a 4.0 GPA and is majoring in Applied Physiology and Kinesiology-Exercise Physiology.

This season she won both the SEC Championship and NCAA Gainesville Regional all around titles. She’s also one of two gymnasts in the nation to record perfect 10.0 marks in vault, bars, and floor this season.

McMurty says she never thought she would come this far in her career.

She also received second team for balance bean and became the NACGC Southeast Region Gymnast of the Year.

Florida Head Coach Jenny Rowland said she’s, “So proud of what Alex has accomplished in academics and athletics. She is the epitome of a student-athlete,” according to Floridagators.com.

McMurtry said that everything happens for a reason.

The Gator Gymnastics team will compete in the NCAA Semifinal II in St. Luis this week. The first meet is set for 8 p.m. tomorrow.

See the fun & sights from the #NCAAGym banquet, which kicks off championship weekend in St. Louis. #Gators compete Friday in Semifinal II pic.twitter.com/qE6YDmLTF9

The Back Nine comes at you after a visit to St. Augustine to see Dad, …