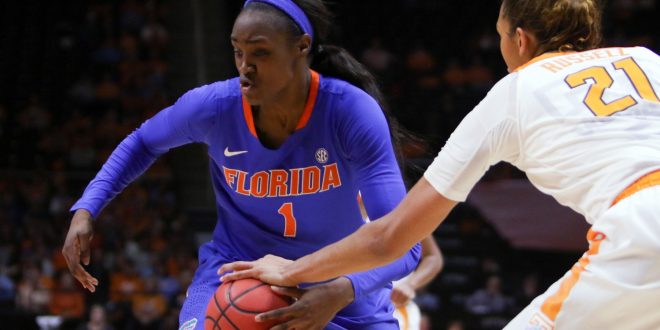 Had the same dream for 18 years and now it's about to come true today . #HeIsGood

Ronni Williams’s friends, family, coaches, and teammates all gathered together to watch the WNBA Draft. The 22nd draft player overall picked and the Indiana Fever picked her second overall.

All of Williams hard work finally paid off. The night turned into a night of celebration surrounded by her favorite people.

Here's that special moment when @Ronnipooh_01 is selected by the @IndianaFever in @WNBA Draft! #GoGators pic.twitter.com/cx3xEKHO1A

Career with the Gators

William’s resume during her time at Florida made her a strong prospect for the WNBA Draft. She has received many awards including: WBCA All- American team, first team All- SEC, SEC Player of the Week in 2016 and 2017, and a regional Finalist for the WBCA Coaches’ All- America Team.

Her most successful game this season was versing Vanderbilt on January 30. This game she scored 43 points and 14 rebounds. Williams became the first SEC women’s basketball player to drop 40+ points and 10+ rebounds in a game since 2003.

Leader off the Courts

Not only was Williams a leader on the courts but she was also a leader for her team. Her senior season, the Women’s Basketball team did not have the best season. In the beginning of the year, the team lost a key player which really affected the team. Williams knew she had to take charge and give her team hope. The team was 15-16 overall which a 3-6 home and 5-8 away.  Many games during the season the team lost by only a few points in the fourth quarter as a result losing the game. Most players would be discouraged with the game results but at each press conference. Instead, Williams approach would how can the team get better at practice in order for fewer mistakes. This approach was why fans, teammates, and coaches love her. She is easy to work with and is a great team player.

With the 22nd pick in the #WDraft17, the #Fever select Ronni Williams out of @GatorsWBK. pic.twitter.com/QpTTuLJTpb

The Indiana Fever can’t wait for Williams to join the team. Other teammates who were drafted include: Erica McCall from Stanford, a 6-3 forward averaging 9.6 points per game, Feyonda Fitzgerald from Temple,  a 5-7 guard who averages 13.6 points and 5.19 assists per game, and Adrienne Motley from Miami Ohio, a 5-9 guard averages 14.3 points and a career- high of 16.9 points.

Indiana Fever President Kelly Krauskopf says “All these players bring something different to the table. ”

Hello my name is Kaitlin Alexander, a passionate story teller and lover of sports. Fun facts about me: I am a world traveler, interviewed all three UF Heisman Trophy winners, and a former intern of Bleacher Report. Follow me on Twitter: KalexanderUF
@KalexanderUF
Previous NBA Playoffs Preview: Thunder Look to Upset Rockets
Next Devin Robinson Declares For The NBA Draft