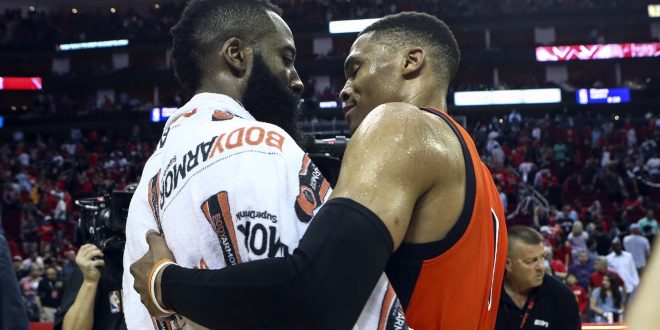 Former Florida men’s basketball coach Billy Donovan returns to the NBA playoffs for his second full NBA season. The former Gator coach hopes to lead his team against all odds.

As a team, the Houston Rockets are pretty three point happy. The Rockets broke their own NBA record but shooting 40. The Rockets roster has a league high of 46 percent from trey. So OKC’s defense needs to look out for this.

Since the departure of Kevin Durant to the Golden State Warriors, Russell Westbrook has really carried this team and the main reason that they are in the playoffs. During the last 10 games the OKC Point Guard has averaged 33.4 points per game and 12.1 rebounds.  It will be interesting to see how Westbrook will perform under pressure with limited help.

Another hurdle that might bring back some bad memories for Russell Westbrook is Patrick Beverley. The Rockets point guard literally knocked Westbrook out of the playoffs in 2013 with a torn meniscus. The two have also had some altercations since then on the court, but the guard will use some aggressiveness to guard Westbrook this series as well.

The Rockets bench is what gives them the upper hand. With shooters like Eric Gordon, Lou Williams, Trevor Ariza, and Ryan Anderson Harden will have a wall to lean on.

One big matchup to look out for is the Russell Westbrook vs James Harden matchup. Harden, the Rockets’ shooting guard will pose a threat to OKC. Harden in the last ten games has averaged 25.9 points per game and 8.9 rebounds.

Statistically, Westbrook will be the dominant one here due to the face that he’s averaged triple-doubles all season, but again he will have to carry a lot of weight shoulders.

“He’s talented, really explosive and athletic. He just goes out there and plays relentless.” Harden says about Westbrook.

Harden is the assist leader this season and will be helped out with the Rockets offense. It could also be a high scoring game for either of the two.

However, Harden won’t be ignored by OKC’s defense. Andre Roberson defended Harden more than any other player this season. This defensive effort lasted for 32:32. This limited Harden to only 34% shooting overall against the Thunder and he shot only 2-for-14 from trey

Game 1 of the first round of the NBA playoffs will take place in Houston, Texas on TNT. Tip off will be at 9 PM.