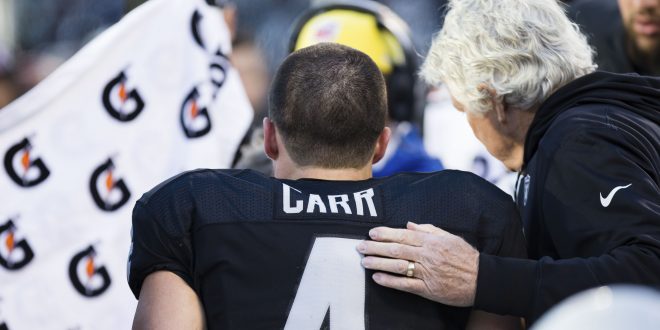 Dec 24, 2016; Oakland, CA, USA; Medical staff surround Oakland Raiders quarterback Derek Carr (4) with gatorade towels after being helped off the field with an injury during the fourth quarter against the Indianapolis Colts at the Oakland Coliseum. The Oakland Raiders defeated the Indianapolis Colts 33-25. Mandatory Credit: Kelley L Cox-USA TODAY Sports

Derek Carr Ready to Lead the Raiders in 2017

On December 24, 2016, Oakland Raiders quarterback Derek Carr landed awkwardly on his ankle in a game against the Indianapolis Colts. He needed help getting up and walking. It was later revealed that Carr suffered a broken fibula and would be out for the rest of the season. His absence was greatly felt as the Raiders went on to lose their last two games including their wild card game against the Houston Texans.

There is little doubt that Derek Carr’s impact on the Raiders has been profound. Since being drafted, the once-disappointing Raiders have experienced a resurgence. This past season, they posted their first winning season since 2002 when they went to the Super Bowl. Carr’s play behind center was the biggest reason for that as he threw for 3,937 yards, 28 touchdowns and 6 interceptions on 64% passing. The Raiders have other players contributing to their success such as edge defender Kahlil Mack, wide receiver Amari Cooper and an offensive line that received the fourth highest grade among offensive lines on Pro Football Focus. But it all starts with Carr, the engine who drives the team.

Moving on to this season

Derek Carr’s fibula is healed enough to be a full participant in Oakland’s off-season training program, according to ESPN writer Paul Gutierrez. He is not medically cleared yet but he hopes will be. That time could come soon as Carr says he’s able to do everything he can such as run and jump.

"I'm back and doing everything."

– @derekcarrqb talks his recovery and looks ahead towards the 2017 season

The Raiders had a solid rushing attack last season, ranking sixth in rushing yards per game. That attack could be bolstered by the possible signing of Marshawn Lynch. Lynch reportedly plans to come out of retirement. He last played for the Seahawks. His time with them was well spent as he rushed for 5,774 yards and 51 touchdowns in five seasons with them. He also won a Super Bowl with them in 2013 against the Denver Broncos. Carr says he would love to have Lynch on the team because he’s a great teammate. Lynch cannot sign with the Raiders until a trade with the Seahawks is made and the deadline could be the 2017 NFL Draft, according to Bleacher Report writer Tim Daniels.

Team ready to focus despite distractions

The Raiders sent shockwaves throughout the NFL when it was announced that their plan to move to Las Vegas had been approved by 31 of the 32 league owners. The team will officially move to Las Vegas in 2019, so it will still be in Oakland for two more seasons. Despite this distraction, Derek Carr says his team is focused on winning and he is determined to give Oakland a memorable last two years.

As for fan support, the Raiders could lose some fans as they move to Vegas. But Carr is not worried about that, saying that true fans will still cheer for them even in a different city.

It all starts with Carr

Whoever cheers for the Raiders now and beyond is cheering for a team that knows what success tastes like again, and it all starts with the gunslinger behind center, Derek Carr.