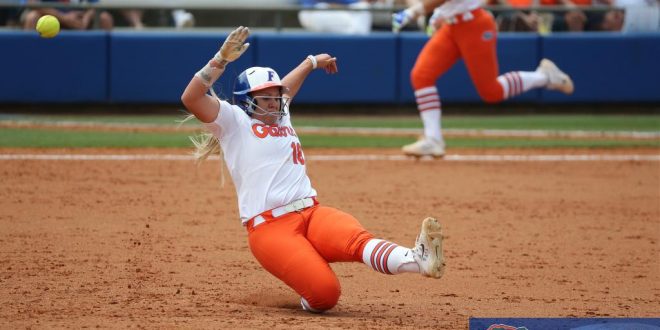 The number one ranked Florida softball team (44-3 overall; 18-2 SEC) shut out number 18 Ole Miss (31-16 overall; 6-12 SEC) for their third consecutive game in a 5-0 victory to sweep their weekend series in Gainesville. It also marks the first time since 2009 that Florida swept Ole Miss in a series with all shutout wins.

Kelly Barnhill started for the Gators on Sunday’s final game of the series and was then later relieved by Aleshia Ocasio for the final two innings. Barnhill stuck out nine Ole Miss Rebels and only allowed one walk, with just a couple of hits on 73 pitches. Ocascio finished the game with three strikeouts, while allowing a walk and a hit.

The Gators got on the board offensively in the bottom of the third inning.   Ocasio singled to shortstop, allowing Justine McLean to score.

B3 | #Gators score first as Ocasio drives in McLean on a single to shortstop! 1-0 #Florida

During the fourth inning the Gators added three more runs to land them in a 4-0 lead. Heres how it happened:

Freshman Jordan Roberts, in a pinch hitting mode, plated Florida’s final run when she hit a sacrifice fly that scored Jamie Hoover who led off the inning by being hit by a pitch.   She got to third thanks to a single by Chelsea Herndon and a walk to Reynoso.

B5 | Roberts sends a high fly ball to left field with the bases loaded but goes down as a SAC as Hoover scores from third!! 5-0 #Gators

The Gators will head to Knoxville to take on Tennessee for its last SEC series of the 2017 regular season that will start on Friday and air on SEC Network+.