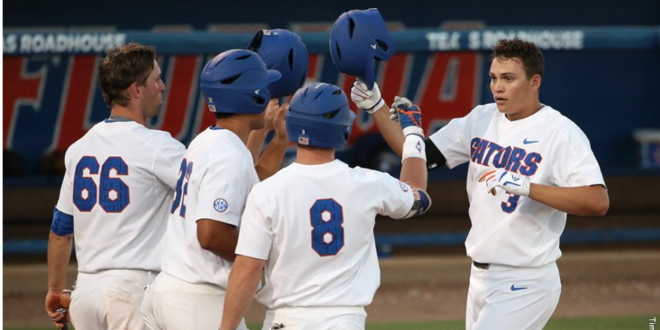 No. 5 Gator Baseball hosts No. 23 USF in Final Mid-Week Game of Regular Season

The fifth ranked Gator baseball team (35-13, 16-8 SEC) hosts 23rd ranked USF (37-10, 12-6 AAC) tonight in the final game of a six-game home stand. The game is also the final mid-week game of the regular season, as Florida has just two SEC weekend series left afterwards before the start of the SEC tournament.

The Gators have been firing on all cylinders recently.

They’re currently riding a nine-game win streak, and have won 15 out of their past 17 games. The recent run has vaulted the Gators atop the SEC East standings, and to a tie with Mississippi State atop the overall SEC standings.

The resurgence has been a result of the starting pitching receiving good run support. The team has been averaging just shy of six and a half runs per game over their last 17 games.

Some of that has been due to the emergence of guys like Ryan Larson (.325 avg), Nelson Maldonado (.318 avg), and Christian Hicks (.309). Those three lead the team in batting average, and while Maldonado was a middle of the lineup guy at the beginning of the season, Larson and Hicks have taken advantage of their opportunities to add some real depth to the Gator lineup.

They teamed up for possibly the sequence of the season for Florida on Friday night. Hicks fouled off nine pitches in a 16 pitch at-bat with the bases loaded before getting ball four on the 16th pitch and walking home the first run of the game. Five pitches later, Larson hit a grand slam, his fourth homer of the season (he added his fifth later on in the series), to give Florida the 5-0 lead over Ole Miss and set the tone for what would be a sweep of the series.

Also crucial has been the return of guys either to form, like J.J. Schwarz, or from injury, like Austin Langworthy and Jonathan India. Schwarz, who at the beginning of the SEC season was hitting below .200, is now fifth on the team in batting average at .273. More than that though, he’s brought a real run driving presence in the heart of the lineup. He leads the team in home runs (six), and has 39 RBI on the season, 16 more than anyone else on the team.

With Langworthy coming back and slotting into the third spot with a .262 average, and India’s return this past weekend (4-for-8, 2R, 2 RBI), the Gator lineup has gone from one that struggled to produce anything at the plate when SEC play started to one that is hitting it’s stride at the just the right time of the season.

The @GatorsBB club seems to be finding their stride. Almost fully healthy and finding contributions from a number of guys offensively

The Bulls enter the matchup as the leaders of the American Athletic Conference after sweeping East Carolina this past weekend. They’re currently on a good run as well, having won their past five games, and 14 out of their last 19 games, including a sweep of UCF.

USF had two players receive conference honors this past week for their performances. Right-handed pitcher Peter Strzelecki was named to the conference honor roll after a career outing on Sunday. He dominated by going 8.1 innings, allowing only one earned run and nabbing 10 strikeouts. Sophomore catcher Tyler Dietrich won player of the week after after batting .750 and driving in five runs over the weekend.

The Bulls carry firepower both in the lineup and in the pitching staff.

Their pitching staff leads the nation in strikeouts per nine innings (10.6) and they rank in the top ten in three other categories including team ERA (sixth).

Florida leads the all-time series 59-24, and is 16-1 under Kevin O’Sullivan against USF. USF’s only win over an O’Sullivan-led Gator team came in 2012 in a 5-3 victory in Gainesville.

Native New Englander. Follow me on Twitter: @jonacosta_10
@jonacosta_10
Previous FEATURE: Excellence of Intramural Sports at the University of Florida
Next Cardiff Waits for The Old Lady