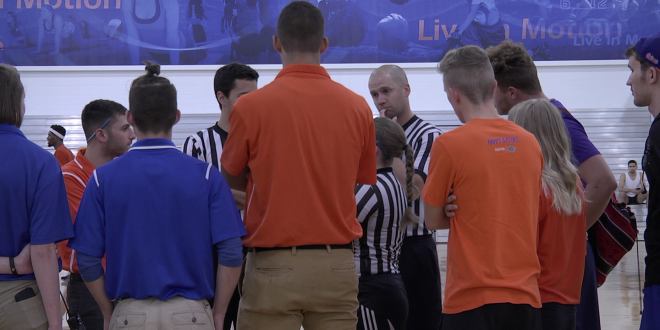 FEATURE: Excellence of Intramural Sports at the University of Florida

Intramural sports at the University of Florida

What makes the University of Florida Intramural Sports’ program influence 12,900 participants to compete in more than 20 leagues throughout the year? Is it their competitive drive or their willingness to give up an hour a week to hang out with their friends? For some, it may be that they want to receive the all prestigious “Intramural Champions” t-shirts. For others, specifically, the employees within RecSports, believe that their staff of over 300 students working as program assistants, supervisors and officials create the successful environment of the intramural sports at UF and influence the high level of student participation.

The inside look at the Competitive Sports’ Program

Keegan Ashbee is the second year Coordinator for Competitive Sports. Ashbee says the students that make up the staff are the face and the success of the program and they are the reason that UF’s program is unique from other schools’ programs.

Kelsey Jones is the Competitive Sports Graduate Assistant. She thinks the mentorship within RecSports plays a key component in the program’s overall success.

For several athletes at the high school level, many fear that their athletic career will stop after the final buzzer sounds on their high school court. For the students at the Universty of Florida though, the competitive sports program provides these students with a multitude of competitive leagues to ensure a high level of competition and well-run facilities to compete throughout their four (or more) years at the University of Florida.

Ashbee says that the participation level and diversity of the students in UF’s intramurals is what sets this program apart from other schools.

The University of Florida gives students opportunities to play sports that they may have never played before. Students can enjoy, racquetball, badminton and wiffle ball along with several other sports that are offered throughout the year.

The University of Florida’s intramural sports’ program provides former high school athletes with opportunities to be a part of a team once more past their high school career.  Students come from high schools all across the nation and are used to playing in cross-town rivalry games that packed their stands on Friday nights. Several of these athletes come to college and miss the everyday lifestyle they became so accustomed to in high school. These days consisted with a routine of waking up early mornings for tournaments, conditioning throughout their summer months, and competing against some of the most talented athletes in the state.

Carly Knox is a sophomore at the University of Florida and says that playing intramurals for her is more than just an hour to re-live her glory days on the soccer field.

For some of these students, re-living their glory days at the Southwest Recreation center is the highlight of their week and a reason to call their parents at home to recite the stats of their game.

The trophy for these students is not a plaque they can hang on the wall or a medal to wear around their neck, but instead an “Intramural Champions” t-shirt to wear around campus. After students receive their first championship shirt, they do not settle but instead, strive to get one in every color.

Will Thomas is a senior at the University of Florida and winning a t-shirt in cornhole as well as competing in the Swamp were two of his favorite experiences while competing in Intramural sports.

More than a shirt

The Competitive Sports program at the University of Florida will continue to be a success. One reason being that the staff at RecSports will continue to ensure the success of the competitions each night and another is because the participants will continue to compete in hopes of receiving the favored “Intramural Champions” t-shirt.

Previous NBA Playoffs: Cavs Move On, Other Series Ongoing
Next No. 5 Gator Baseball hosts No. 23 USF in Final Mid-Week Game of Regular Season