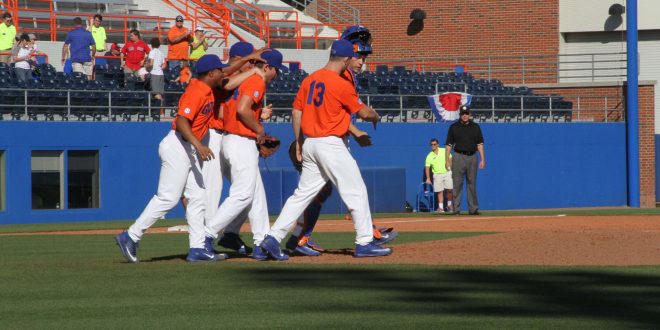 A number of Gator athletic teams are still competing either for regular season or postseason championships after activity over the weekend.

** The Gator baseball team is now in sole possession of first place in the SEC with three games to go in the season after sweeping Alabama over the weekend.   Florida’s 10-5 win Sunday gives them a one game lead over Kentucky and LSU heading into the final week of play.  Ironically, Florida will host the Wildcats in the final regular season series of the season beginning on Thursday.

** Both Gator tennis teams advance to the NCAA Sweet 16 after winning two matches at home this weekend.   The Florida women advance to play Texas A&M while the Gator men will take on Virginia on Thursday.

** The Gator softball team is the overall number one national seed for the upcoming NCAA Tournament.   Florida will also host a NCAA Regional and every team in the SEC makes the field as well, setting a record.

** The Florida lacrosse team saw its season come to an end after losing to USC 15-12 in a NCAA Tournament match in Gainesville.

Previous Gator Baseball Opens Series With Alabama With A Win
Next Gator Softball Enters NCAA Tournament as Overall No. 1 Seed