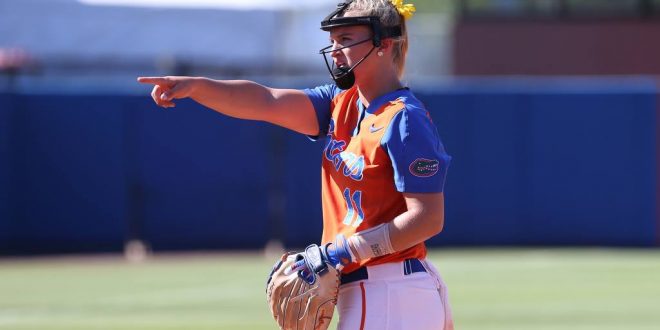 On Saturday night in Gainesville, the Gator softball team became Super Regional champs after and exciting defensive battle against the Alabama Crimson Tide. Florida defeated the Crimson Tide 2-1 and won the series 2-1. The Gators are now headed to the Women’s College World Series for the first time since 2015.

The Gators executed their offense early and got on base in the first inning. Amanda Lorenz recorded the first run for the Gators. Aleshia Ocasio sent her in after she hit a RBI single. Kayli Kvistad scored after Jordan Roberts got hit by a pitch.

This brought the score to 2-0 early in the game. Kvistad also had a huge hit that got her in scoring position, but the Gators couldn’t bring her home. Luckily, they didn’t need to. Florida’s pitcher Kelly Barnhill took care of the rest.

Alabama could only muster one run, and that was enough to keep the Gators on their toes. Elissa Brown got a RBI for the Tide and cut the Gators’ lead in half. Alabama just couldn’t crack Kelly Barnhill’s ERA, now at 0.34. The Tide’s one through seven hitters were a combined 0-for-19. Barnhill delivered 12 strikeouts and only gave up two hits in this matchup, leaving no room for Alabama to score.

The Tide had one more chance to score with a runner on base in the top of the seventh, but Barnhill wasn’t going to let that happen, especially after Thursday nights’ disappointing finish. Barnhill has had her sights set on a trip to Oklahoma for quite some time now, and it’s safe to say she got what she deserved.

The Gators will head to Oklahoma City in the first week of June. UCLA, Oregon, and Oklahoma are the other teams that have advanced thus far to the WCWS. The rest of the teams will be decided when they wrap up their Super Regionals on Sunday.