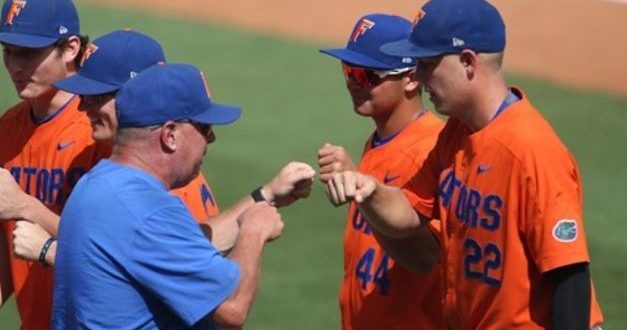 The Florida Gator baseball team has officially been named the No. 3 overall seed heading into the NCAA tournament. The Gators will be hosting a NCAA Regional at McKethan Stadium for the eighth time in the last 10 seasons under head coach Kevin O’Sullivan. Florida is one of four SEC teams hosting a NCAA Regional. Here’s a conference by conference breakdown of the 16 hosts.

The top 8 seeds are as follows.

The entire bracket can be viewed here.

USF, Bethune-Cookman, and Marist are the teams joining Florida in the Gainesville Regional.

Florida will be looking to start a run to a third consecutive College World Series. Since 2008, the Gator baseball team has made the NCAA tournament every year and has failed to advance out of their NCAA Regional on only three occasions (2008, 2013 & 2014). Florida holds a 98-69 record all-time in NCAA tournament play.

Action begins on Friday, June 2 at 1 p.m. when USF takes on Bethune-Cookman. The Gators open up play against Marist later in the day at 7 p.m.

I'm an above-average golfer with surprisingly great touch around the greens. Click on my twitter link for some sports talk.
@Ry_McGinn
Previous Florida Gator Softball is Headed to Women’s College World Series
Next NCAA Baseball Regionals Have SEC, State of Florida Flavor