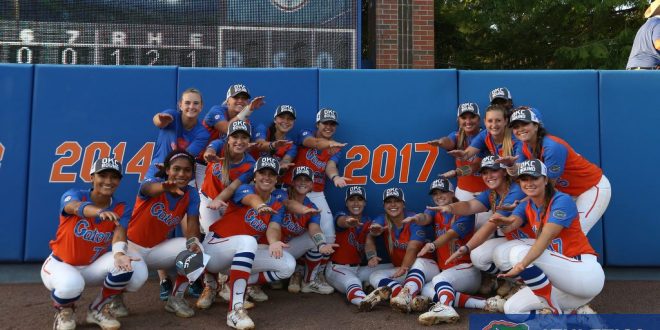 The Florida Gators Softball team are preparing to kick off the 2017 WCWS Thursday at noon. For a small handful of the girls, this won’t be their first rodeo at this coveted contest. For most of them, it’s their first time ever-and things couldn’t be more exciting.

Its hard to imagine the 2017 USA Collegiate Softball Player of the Year is just a sophomore, and this is her first trip to Oklahoma City. All the more reason to make it memorable. Kelly Barnhill is expected to lead the Gators to greatness with her 70mph riseball and fierce attitude. The Gators will play against Texas A&M for the second time in the WCWS.

Texas A&M is 47-11 this season. Against the Gators, Florida has the upper hand- securing a 12-4 record in the all-time series. Nearly a decade ago, Florida faced Texas A&M in extra innings and The Aggies came out on top 1-0. Florida was eliminated in the semifinal round at the WCWS. The most recent matchup between the two was much better for Florida. The Gators won the last series 2-1 away.

The Aggies have momentum going because this is their first trip to the WCWS since 2008. Their leadoff hitter, Keeli Milligan, is one to watch. Milligan is known for her aggressiveness and tenacity, especially after taking a hit to the face against Tennessee in the super regional contest. She and the rest of her team are tough and have the ability to bounce back quickly if needed.

In case you didn’t already know, Kelly Barnhill has consistently been the number one pitcher  in the nation, currently holding a 0.36 ERA. Along with Aleshia Ocasio and Delaine Gourley considered the top ten pitchers throughout the season. Gourley, Barnhill and Amanda Lorenz each were first team selections on this year’s NFCA All-American teams. Kayla Kvistad  was selected for the third team.

Florida’s offense has been picking back up lately and they shouldn’t have a problem getting it started with these recent averages. Nicole DeWitt stands at .316, Lorenz is at .390, Kvistad has .387, and Ocasio holds a .313 average.

If the Gators win, they’ll go on to face the winner of the LSU-UCLA game Friday night. The WCWS goes on through June 7 and the first game will be on ESPN.