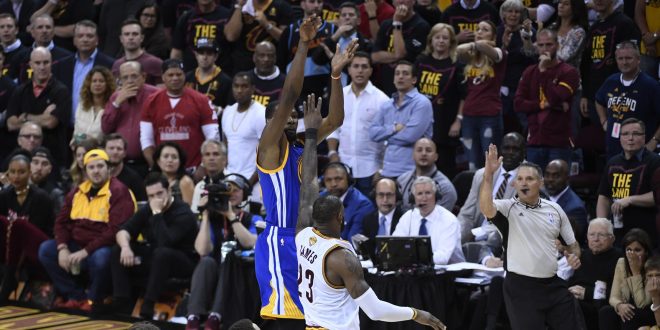 The Golden State Warriors went into Cleveland knowing that last year’s Game 3 was where their downfall started. Things are quite different this time around thanks to a man by the name of Kevin Durant.

Durant has stolen the spotlight in the NBA finals especially with his performance last night, finishing with 31 points. Yes, his surrounding cast of Steph Curry, Draymond Green, and Klay Thompson has made his opportunities to score a lot higher. However, when this game needed a hero for Golden State he was the one who stepped up.

Down at the half, the Cavaliers stormed out of the gate in the second half with a 7-2 run to cut the Warriors’ lead to 1. LeBron James and Kyrie Irving electrified the crowd with their crisp passing and marauding drives to the basket. Familiar foe, Draymond Green, got into foul trouble which forced him to ride the bench in order to be available for crunch time later on.

The Kyrie Irving of last year’s NBA Finals finally emerged onto the scene. His acrobatic and down-right insane layups seemed to go in every time he threw the ball up towards the rim. Irving was the catalyst to a Cleveland offense that was keeping up (and beating) their counterpart’s for the first time in the series.

Draymond Green picked up his fifth foul on the night, Kevin Durant and Steph Curry started the 4th quarter on the bench, and the Cleveland offense was cruising… sounds like a recipe for LeBron and the Cavs to win their first game of the series.

It should have been.

Golden State’s shots just weren’t falling like they were in Oakland. There was clear frustration from the Warriors shooters in the second half, but they somehow maintained pace with the Cavaliers.

Cleveland’s five point lead in the fourth quarter was maintained the majority of the way. Until their own misfortune struck.

This tweet sums up how the Cavaliers threw away Game 3 of the NBA Finals:

There’s a big difference between a series being 2-1 and it being 3-0. The fourth quarter was the chance for Cleveland to solidify their place in the finals, but it was a chance that went begging.

Originally from Ocala, Florida. University of Florida Class of 2017. Avid FIFA player willing to beat anybody. Follow me on Twitter for everything you need to know!
@JoshLaSelva
Previous The Best MLB Games of the Night
Next Florida Gator Softball 2017 Season