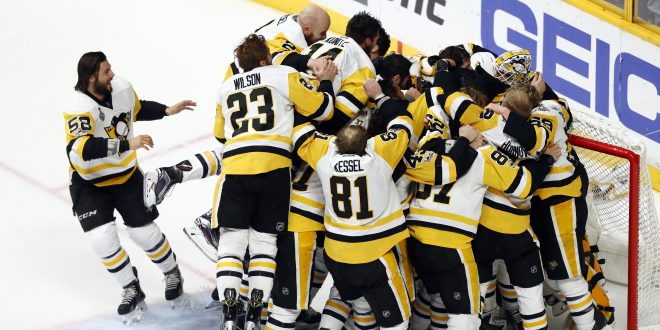 The Pittsburgh Penguins are 2017 Stanley Cup Champions after defeating the Nashville Predators 2-0 in a hard-fought Game 6. The 4-2 series win gives Pittsburgh their second consecutive title, the fifth in team history. The Penguins are the first NHL team to win back-to-back championships since the Detroit Red Wings did so in 1997 and 1998.

The goaltenders for both sides were fantastic in the first period and throughout the entirety of the game. Matt Murray, who was coming off a 24-save shutout victory in Game 5, had eight of his 27 total saves in the opening period. His shutout performance in Game 6 did not come without controversy. About a minute into the second period, Filip Forsburg fired a shot that trickled off of Murray and was poked into the net by Colton Sissons for what appeared to be a go-ahead goal for the Predators. However, the goal did not count because the referee whistled the play dead when lost sight of the puck. The game would remain scoreless heading into the second intermission.

Sissons had another shot ring off the post, late in the third period. Murray commented on how he also shut down a five-on-three Nashville power play about half way through the third, one of many Predators scoring opportunities. That’s when, according to Pittsburgh star center Sidney Crosby, the momentum seemed to shift. After the game, Penguins head coach Mike Sullivan praised not only Matt Murray, but Marc-Andre Fleury‘s playoff effort as well.

Pittsburgh finally broke through to end the scoreless tie with 1:35 remaining in the third period. Patric Hornqvist scored the eventual game-winner, his fifth goal of the 2017 postseason, to put the Penguins up 1-0. Carl Hagelin sealed the victory with an empty-net goal to extend the lead to 2-0. Nashville goaltender Pekka Rinne finished the game with 27 saves on 28 shots faced.

The Predators entered the Playoffs with the lowest point total out of the teams that made it into the postseason. Nashville captain Mike Fisher says the finish is disappointing, but the team has a lot to be proud of. After the game, Rinne described the emotional roller coaster of Game 6. Predators head coach Peter Laviolette added that his players’ hearts are heavy right now, but also thought the team responded well after losing Game 5 by a score of 6-0 on the road.

Pittsburgh’s road to the 2017 Stanley Cup title was not an easy one. They won two Game 7s during their run. One win was on the road against the Washington Capitals, winners of the Presidents’ trophy, and the other was at home in overtime against the Ottawa Senators.

The league awarded Crosby the Conn Smythe trophy. It’s given to the most valuable player of the Stanley Cup Playoffs, for the second year in a row. After the game, Penguins legend and current owner Mario Lemieux reflected on Crosby’s career to this point.

I'm an above-average golfer with surprisingly great touch around the greens. Click on my twitter link for some sports talk.
@Ry_McGinn
Previous World Cup Qualifier: North American Rivals Dual in Nail-Biter
Next Warriors Can Clinch NBA Title vs. Cavs with Win in Game 5