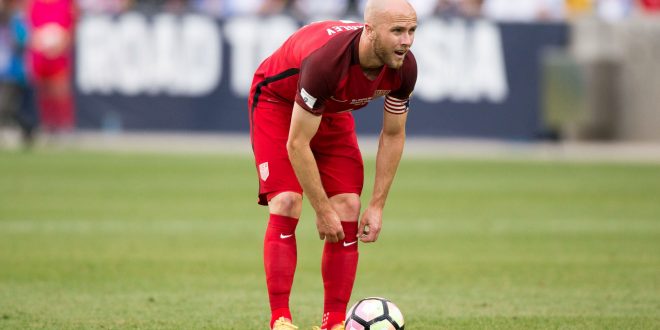 On Sunday night, the United States Men’s National Team (USMNT) faced Mexico in a heated qualifying match on Mexico’s home turf in the Estadio Azteca; neither team was outmatched. That being said, the 1-1 draw was huge for the United States. The point earned from last night’s match marks the third time in history that they earned points in Mexico in a qualifying match.

Mexico was extremely physical in the opening minutes of the game but the U.S. continued to play through the contact. Particularly when Michael Bradley broke through with a jaw-dropping 40-yard chip shot past Guillermo Ochoa in the sixth minute.

The United States had Mexico right where they wanted them for the time being; that is until Mexico’s Carlos Vela answered with a corner kick to the bottom right corner in the 23rd minute. The tying goal seemed to deflate all of the United States’ momentum in favor of Mexico, who finished the rest of the first half with a shut-down defensive mentality and a steady dose of offensive attack on the U.S. defense.

The second half started as the first half ended: Mexico peppered the U.S. defense right out of the gate. U.S.A. goalkeeper Brad Guzan held his own in the cage, allowing his team to settle into the half and chip away at Mexico’s intensity. From there, the match’s momentum swung back-and-forth but with much less intensity than the first half provided. Easy saves came one after another as did the questionable shots. Though there was a glimpse of World Cup dramatics when Mexico’s Héctor Herrera unleashed a bomb that hit off the top-right portion of the crossbar in the 71st minute, neither team was victorious.

Mexico is currently first place in the 2018 CONCACAF Hex World Cup Qualifying Standings with 14 points. The United States is tied with Costa Rica for second place with 8 points. with a two-point advantage over Panama. Each team has four matches remaining in the CONCACAF Hexagonal schedule. The top three teams clinch an automatic berth to Russia 2018.