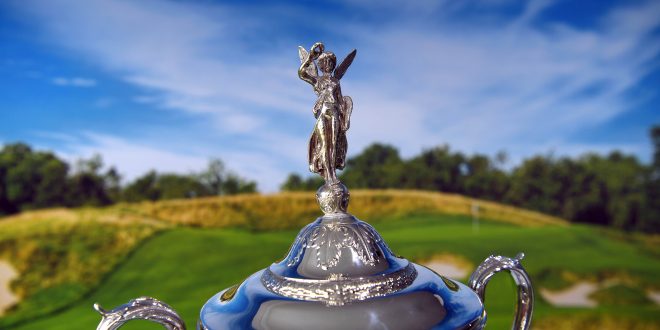 Jun 12, 2017; Erin, WI, USA; Detail view of the top of the US Open Championship Trophy seen in the Lexus fan experience during the opening practice round of the U.S. Open golf tournament at Erin Hills. Mandatory Credit: Michael Madrid-USA TODAY Sports

The 117th U.S. Open at Erin Hills Golf Club begins on June 15 at 6:45 am. This is the first U.S. Open to be hosted in Wisconsin. Erin Hills, located 35 miles northwest of Milwaukee, has never appeared on the PGA tour.

The majority of those golfing this weekend have no experience on the steep rolling hills of Wisconsin’s Erin Hills, but Bryson DeChambeau does. DeChambeau won a collegiate tournament hosted by Marquette in 2014, however he is still seen as a long shot to win the U.S. Open (200/1).

Trees at Erin Hills are non-existent, however wind is. The lack of trees will contribute to the tough weather conditions predicted for the weekend. Wind speeds upwards of 15 mph will make placing shots on the generously wide 50-yard fairways much harder.

The course is characterized by unusually long and wide fairways with deadly high fescue that bookend each hole. The quick transition from rough to fescue will leave many golfers searching for balls. Multiple golfers, including Kevin Na, have posted videos on social media demonstrating how devastating swinging in the fescue is.

The United States Golf Assosciation announced on Monday that they mowed some of the fescue. However, that the mowing was planned and not in response to complaints.

We knew that mowing certain parts of the fescue might be required this week, and following Monday's storm, it was. https://t.co/QDDKVXiN3M pic.twitter.com/I0C0sJJhhi

The recent buzz about the “unfair” fescue conditions lining the fairways has come to a halt with Rory McIlroy’s recent comment denounced the complainers. McIlroy was asked about the fescue after the USGA trimmed back some of the grass hazards yesterday. He said that the best golfers in the world shouldn’t be worried about the rough conditions, and if they are, they should go home.