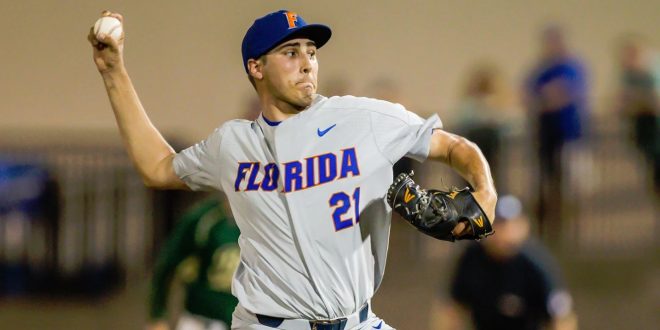 It’s that time of the year again in college baseball. All roads lead to this point every year. Eight teams battling it out in Omaha, Nebraska for a national title.

And this year, in a field full of teams plenty familiar with TD Ameritrade Park, Florida and TCU are the two teams with the most College World Series trips over the past eight years (six and five respectively). Yet, both teams will be hoping a win on Sunday night can propel them to run for a first national title in school history.

Head Coach Kevin O’Sullivan said after the Super Regional win that he’d rather have his team win ugly than win pretty, and that’s exactly what they’ve been doing.

Florida has won 18 one-run games this season, including their Game 1 win over Wake Forest in the Super Regional. The Gators have scraped all season long for victories, and while the consensus among many is that the team may be less talented than others that have made it to Omaha, the battle-tested nature of the team makes them a legit contender.

A big reason for that is the strength of the pitching staff. It features two D1 Baseball All-Americans in first-teamer Michael Byrne and second-teamer Alex Faedo.

Byrne has been a big key in many of the close wins, breaking the school record for saves, as he currently stands at 16. He’s also stepped up in big moments when he was the guy O’Sullivan trusted the most. This was most evident in the Regional when he stepped up to deliver 10 innings of work without allowing an earned run.

Faedo, meanwhile, is fresh off a heck of a Monday night in which he both closed the deal against Wake Forest to send Florida to Omaha and got drafted by the Detroit Tigers in the first round of the MLB Draft. The arm talent that made him the 18th overall pick will be on display over the next week and a half, and he’ll get the start on the mound against TCU. He boasts a 7-2 record with a 2.55 ERA, including just a 0.95 ERA in his last four appearances, and ranks eighth in the country in strikeouts (135).

And if the Gators need someone to bridge the gap for a couple of innings between Faedo and Byrne, they may have found the guy in freshman Tyler Dyson. Dyson picked up the win in the series-clinching 3-0 victory over Wake Forest after tossing 5.0 scoreless innings and striking out seven batters. Dyson showed excellent poise for a freshman and good command both of a nasty slider and a rocket of a fastball that reaches 96 mph.

So while the pitching may be figured out, Florida has to hope its bats can wake up after a less-than-stellar tournament so far. The team as a whole is batting just .222 over the past five games, and have been surviving on timely hits, whether it be a walk-off from Ryan Larson or dingers from J.J. Schwarz and Austin Langworthy.

Still, just three players are batting over .200 for the Gators over the past five games (Deacon Liput, Jonathan India, and Dalton Guthrie). Liput and India have really been raking as of late, hitting .368 and .350 over that stretch and combining five RBIs and five runs. If the bats overall continue to stay relatively cold, they’ll need timely hitting and the bats of these infielders to provide run support for the pitching staff.

Fort Worth Regional: Swept through it by beating Central Connecticut, Virginia, and Dallas Baptist

If there’s one thing this team has, it’s experience. It’s a testament to the program head coach Jim Schlossnagle has built in Fort Worth, who’s made TCU a powerhouse in his 14 seasons at the helm, that the Horned Frogs are here again.

They’ve been to Omaha five out the last eight years, and each of the past four, and are looking to use last year’s defeat to eventual champion Coastal Carolina just before the championship series to push them this go around.

That experience means that this isn’t the first CWS rodeo for many on the team. In fact, TCU has just one freshman in the batting order, and has seven different players making at least their third appearance in Omaha.

At the plate, both offensively and defensively, they’re led by one of those seven players, first-team All-American and junior catcher Evan Skoug. Skoug has no problems bringing home some runs for the Horned Frogs. He ranks 10th in the country with 20 home runs, and is top-25 in RBIs with 66. Skoug was also recently selected in the seventh round of the MLB Draft by the Chicago White Sox. As a team, the Horned Frogs bat .271 and have 56 more RBIs on the season than the Gators, but TCU does strike out more often as well (50 more strikeouts).

The guy Skoug will be catching pitches from has put up an equally impressive season. On the mound Sunday night, TCU will be matching Florida’s All-American with an All-American of their own. Redshirt sophomore Jared Janczak will get the start for the Horned Frogs, after posting a 1.97 ERA on the season, and ranks 13th in the country in that category, just behind Florida’s Byrne. He’s 9-0 this year, good enough to earn him a third-team All-American selection by D1 Baseball.

As a staff, TCU’s pitchers match up pretty well with Florida’s. While the Gators have a lower team ERA ( 3.55 vs. 4.07), the Horned Frogs have walked fewer batters, and their batting average against (.239) is 18 percentage points better than the Gators’.

Also, it is key to note is that TCU gets off to good starts in Omaha. They’ve won their first game of the College World Series each of the past four times they’ve gotten to this stage.

Getting off to a fast start will be something both teams will be looking to do Sunday night.

First pitch is Sunday at 7 p.m. with coverage on ESPN2.