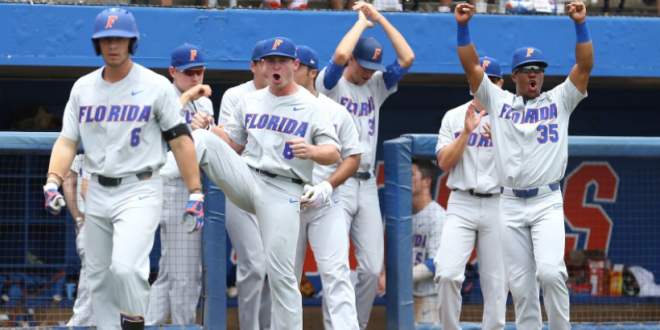 After some exciting NCAA Super Regional action, the College World Series has begun. The eight remaining teams have now been divided into two groups of four. Group play will be double elimination style. One team from each group will remain, setting up a championship series match up. Let’s take a look at each of the programs that have made their way to Omaha.

The top-seeded Oregon State Beavers are back in Omaha after breezing through their regional and super regional matchups. They went 3-0 in regional action, defeating Holy Cross and then Yale twice. In super regionals they made quick work of Vanderbilt, sweeping them with two straight wins. This will be the Beavers’ sixth College World Series appearance and it comes on the 10-year anniversary of their back-to-back championships in 2006 and 2007.

Key to Success: The Oregon State pitching staff is the only staff in the NCAA to boast an ERA under 2.00 with a 1.80 team ERA. In fact, the next closest team isn’t even sub-2.50. If the Beavers are to be successful, they will need more of the same great pitching they’ve gotten all season.

The Cal State Fullerton Titans are no stranger to the College World Series. A 2017 appearance marks the second time the team has made it to Omaha in the past three years, the 18th overall in program history. The Titans won three straight games in regionals, but overcame losing the first game of super regionals against Big West rival Long Beach State on the road to make it back to the College World Series. They’ve won four titles in program history, the last being in 2004.

The ‘Noles are back in the College World Series for the 22nd time in program history. While Seminoles swept their super regional against Sam Houston, it was certainly not an easy road through regionals for FSU. They lost their opener to Tennessee Tech and were trailing Auburn by a run in the bottom of the ninth in an elimination game, but managed to rally and survive to stay alive.

Key to Success: In order to capture their first title in program history, the Seminoles need to see continued production from junior Dylan Busby. He leads the team with 14 home runs and 20 doubles. If FSU gets their bats rolling, look for him to be the spark.

The LSU Tigers will be back in Omaha for the 18th time in program history. The SEC Tournament champions breezed through regionals and super regionals without a loss and are in search of their seventh title. They last came out on top in 2009.

Key to Success: Junior pitcher Alex Lange has a 2.92 ERA on the year. He struck out 10 in his last start in super regionals against Mississippi State over 7.2 innings pitched. They’ll also need closer Hunter Newman to be sharp. He’s capitalized on 10 of 11 save opportunities this season.

The Horned Frogs are making just their fifth College World Series in program history, but 2017 marks the fourth year in a row TCU will be making an appearance. They’re also undefeated in this year’s NCAA Tournament to this point. They took down Missouri State in two games by scores of 3-2 and 8-1. They’re also Florida’s first opponent.

Key to Success: TCU is hoping junior Evan Skoug can keep his bat hot. He has 12 RBI in the NCAA Tournament to this point and homered in four of the five games. The team’s batting average on the season is .272. That’s good for 147th in the country, so needless to say they’ll need Skoug to keep it going.

The Gators did drop a game in regionals and have faced elimination twice so far in the NCAA Tournament. A slugging Wake Forest squad gave Florida all they could handle in a winner-take-all Game 3, but Florida managed to squeak by, winning 3-0.

Key to Success: Ace Alex Faedo was drafted 18th overall by the Detroit Tigers and the Gators will start him in the opener against TCU. Faedo is eighth in the NCAA with 135 strikeouts this season.

The Cardinals are back in the College World Series after a two-year absence. This is their fourth appearance in program history, all of those have come since 2007. They defeated Kentucky twice in super regionals to advance to Omaha and didn’t lose a game in regionals either.

Key to Success: Louisville’s team ERA is third in the NCAA at 2.85. They’ll look to keep dealing and will also rely heavily on the services of Brendan McKay. McKay won his third straight John Olerud Award this season, given to the best two-way player in the nation.

The Aggies are also undefeated in NCAA Tournament play despite not hosting a regional. They swept Davidson in super regionals. The biggest surprise team of the College World Series, Texas A&M is currently No. 46 in RPI. This is their first College World Series since 2011, sixth overall in program history.

Key to Success: One consistency the Aggies have had all season has been their pitching. They have the 15th best ERA in the NCAA at 3.42. Junior Brigham Hill leads the way with a 3.18 ERA on the season.

Florida State vs. LSU: Saturday at 8 p.m. on ESPN

Texas A&M vs. Louisville: Sunday at 2 p.m. on ESPN

I'm an above-average golfer with surprisingly great touch around the greens. Click on my twitter link for some sports talk.
@Ry_McGinn
Previous College World Series: Gator Baseball Starts Quest for Title Against TCU
Next Gators Shut Out TCU in Opening Game of CWS