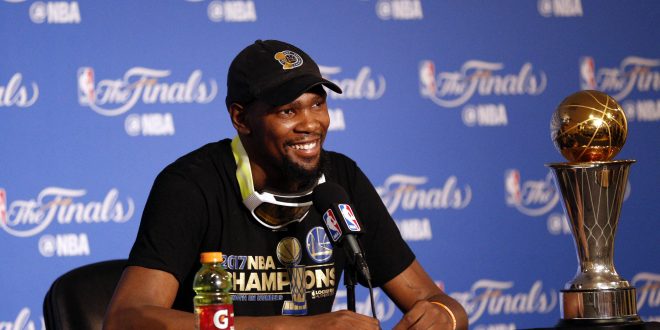 The NBA off-season is always a frenzy, especially when it comes to free agency. Free agents are often the key to teams winning championships. Look no further than Kevin Durant. The Golden State Warriors blew a 3-1 lead and as a result, recruited Durant to help them reach the mountaintop that they had climbed two years ago. In the end, it paid off. Durant is a free agent again this off-season and is arguably the best one in a loaded free agent class.

After coming off an NBA Finals in which he averaged 35-8-5 on an absurd true shooting percentage of 68, Durant is the head honcho of this free agency class. The 6’9″ small forward offers a rare skill set of size and elite offensive prowess that coaches salivate over. The starting small forward for the Warriors last year was Harrison Barnes. Barnes struggled mightily in the Finals, averaging 9 points on 39 percent shooting. Considering the starting small forward on the other finals team was none other than LeBron James, that kind of performance wasn’t going to cut it. Fast forward a year later and Durant proves to be a stratospheric upgrade.

Chance that he leaves the Warriors: Zero. According to ESPN writer Chris Haynes, Durant is expected to decline his player option and then re-sign with the Warriors when free agency begins on July 1.

Curry had a “down” 2016-17 season by his standards. After coming off a season in which he averaged 30 points and shot 50-45-91, Curry came back down to Earth a little bit and averaged 25 points while shooting 47-41-90. However, the fact that this season was considered to be a “down” one for him shows how great he truly he is. Any team would love to have a player who is an assassin from the three-point line and can completely fool even the best defenders. Even with the addition of Durant, Curry is still the face of the Warriors. The whole offense runs through him.

Chance that he leaves the Warriors: Zero. The chances that the Warriors let go of Curry, a player who has catapulted them to great heights, are slim to none. Don’t be surprised if he signs the most lucrative deal in NBA history.

Chris Paul is a passing magician who’s assist skills are consistently off-the-charts. He’s widely regarded as one of the top point guards year in and year out because of his ability to constantly find the open man. He’s also not too shabby of a scorer, averaging a career 19 points on 47 percent shooting. Since being traded to the Los Angeles Clippers, Paul has formed a tandem with Blake Griffin that transformed them into one of the most exciting teams to watch.

Chance that he leaves the Clippers: 100 percent. On Wednesday, June 28, Paul was traded to the Rockets. This now gives them two of the best ball handlers in the NBA. Rockets general manager Daryl Morey was clearly very excited about the trade.

Chris Paul and James Harden blaming each other after they lose in the second round this year pic.twitter.com/IHEJrFF8wt

Blake Griffin has been a key player for the Clippers ever since he got drafted and especially since Chris Paul came to town. He offers a great mix of size, athleticism and rim presence. He’s also significantly improved his free-throw shooting throughout the years, shooting an average of 61 percent from the charity stripe in his first three seasons and then averaging at least 70 percent in his next four seasons.

Chance that he leaves the Clippers: More than likely. Griffin opted out of his contract and with the Clippers looking like they’re completely committed to a full rebuild, it does not look like they’ll try to pursue Griffin in the summer.

It’s been quite an NBA journey for small forward Gordon Hayward. He’s improved his scoring average every year since entering the league, going from averaging five points in his first season to averaging 22 points this past season. Hayward is an extremely hard worker who gives his team a great chance to win every game, and that’s something that any coach would want.