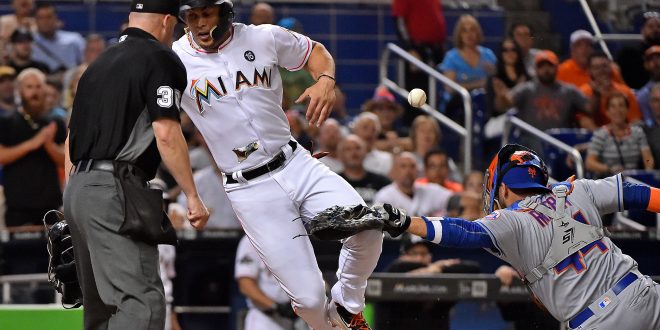 The Miami Marlins, Tampa Bay Rays and Atlanta Braves are stinging from defeat. After three rough outings last night, we take a look at these games and what comes next for these teams.

Firstly, the Braves would walk into Petco Park with one thing in mind; taking the victory in this finale against the San Diego Padres. Unfortunately, that would not happen for the Braves on the road.

The biggest problem for Atlanta last night would come in the form of 6’4″ Padres starting pitcher Dinelson Lamet. Lamet’s three pitch mix is what can be looked back as the catalyst for the 6-0 defeat. The biggest moment of the game would come from Padre first baseman Wil Myers, seeking redemption from controversy on Tuesday night. Myers would score a powerful run in the third to put the Padres up 3-0.

Hunter Renfroe also was looking to make an impact in this game, hitting the longest homer of his career [444 feet], putting the nail in the coffin for the Braves.

The Marlins and Giancarlo Stanton would get bit by the bug of defeat after a tough outing at home at Marlins Park against the New York Mets.

The key for the Mets’ victory on Thursday night would simply be momentum. Specifically, the momentum of outfielder Jay Bruce, as he hit a two-out RBI single in the first inning, which gave the Mets the early lead and momentum.

The Marlins would fight back in the sixth inning, scoring three runs to make it 5-3 and start to gain traction going in the seventh. Unfortunately for Miami, the Mets would have an answer to everything they could muster to keep the game in New York’s favor. The Marlins are looking to shake off the cobwebs, especially with their next challenge rapidly approaching in the Milwaukee Brewers.

The Tampa Bay Rays would feel the wrath of a loss also, going down to the Pittsburgh Pirates on the road. The Rays were hoping to steal a victory from Pittsburgh on the road from PNC Park in Pittsburgh.

The undoing for the Rays? The season turnarounds of outfielders Andrew McCutchen and John Jaso. The performance from these two would prove to be the undoing of Chris Archer and the Rays, keeping Tampa Bay scoreless and on the losing side of the 4-0 tilt.

Tampa Bay just could not find an answer to the game of the Pirates. Tony Watson, the Pirate starting in the pitcher in the game,  would shine in this game, getting out of early trouble by striking out Corey Dickerson and then forcing Evan Longoria to pop-out in his first appearance at the plate. Adding fuel to the fire is the resurgence of McCutchen, hitting .396 since May 20.

Ultimately, these three teams have an opportunity to turn their luck around. The Braves next face the Oakland Athletics in a weekend series, while the Marlins do battle against the Milwaukee Brewers in another weekend series. Finally, the Rays look to gain traction against the Baltimore Orioles in their weekend series on the road. For more on MLB baseball, stay tuned to ESPN Gainesville.