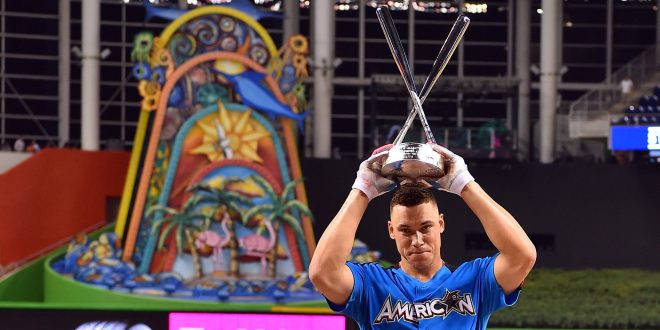 The home run derby began in 1985, and never before in its 32-year history had a rookie won the competition.

Aaron Judge, the 6’7″ rookie phenom for the Yankees, became the first rookie to win the home run derby outright, defeating Minnesota’s Miguel Sano in the final round. Judge needed just 11 home runs in the final round to win the competition, and did so with two full minutes left on the clock.

Judge Blasts His Way to the Top

There was plenty of hype coming into the competition. Giancarlo Stanton of the Marlins was looking to defend his title from last season at his home park. Meanwhile, three of the other top six league leaders in home runs looked to knock him off his perch, including two rookies in Judge and the Dodgers’ Cody Bellinger.

Ironically enough, Judge’s toughest competition came in the first round against a Miami player, but it wasn’t Stanton. Justin Bour launched 22 home runs, putting Judge up to the task immediately if he wanted to advance. Judge rose to the occasion, launching 23 and advancing to the next round for a rookie-on-rookie duel against Bellinger. Stanton, the top seed on the other side of the bracket, was upset by Judge’s teammate Gary Sanchez.

Bellinger only managed 12 dingers in the semifinals, putting Judge in a good spot. Judge went to work, absolutely crushing pitches that included a stretch where he followed up a 504 foot homer with a 513 foot moonshot, the longest home run of the evening.

513 feet later, Aaron Judge had the longest home run of the derby pic.twitter.com/GqWmviMepe

According to Statcast, Judge launched four home runs throughout the derby that went over 500 feet. Everyone else combined for none.

Sano took away the possibility of a Yankee-Yankee final by taking down Sanchez in the semifinals, but Judge had the advantage heading in as he got to go last. Knowing he only needed 10 homers, Judge quickly belted out 11 of them to capture the trophy and the label of Home Run Derby champion.