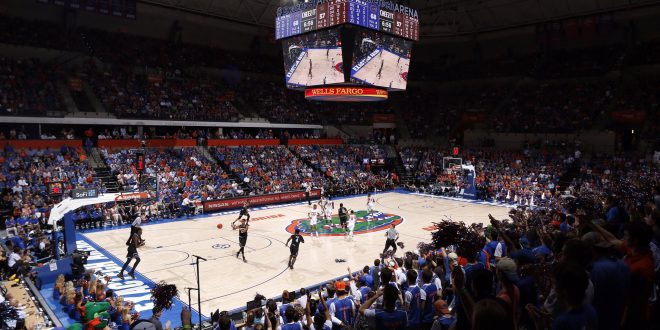 The Florida Gators men’s basketball 2017-18 non-conference schedule has been released, and once again it’s a doozy.

Florida will play up to seven conference rivals and five top 25 teams in the upcoming 13 game season. The Gators will be kicking things off with the first four games at home, the first being an exhibition against the University of Tampa on Sunday, Nov.5. The new and improved Exactech Arena at the Stephen C. O’Connell Center will host eight home games this season. Including big games against Florida State in early December and Baylor in late January.

The Gator’s roster for the upcoming season was also released recently. Guard Chris Chiozza and center John Egbunu will be leading the team as the only seniors on the 2017/18 roster.

We know you were wondering… pic.twitter.com/dasTIOpQ5I

Head coach Mike White will continue to lead the team following his recent contract extension with the Florida Gators.

That #FridayFeeling when you lock up your head coach through 2022-23. Congrats on the contract extension, @MikeWhiteUF #Winner #OneTeam pic.twitter.com/YWtIGahRZz

“Gator fans deserve to see us play in this type of schedule,” noted coach White when asked about the release of the upcoming non-conference schedule. “It’s great preparation for the SEC season, of course, and it gives us an opportunity for the computers to like us. We’re all excited to get back to playing a full schedule at Exactech Arena, which our fans and the Rowdy Reptiles help make one of the great environments in college basketball.”