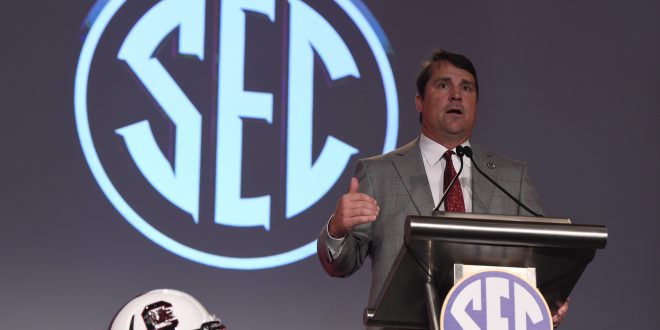 Former Florida Gators football head coach Will Muschamp is entering his second season as the head coach of the South Carolina Gamecocks football team. In his first season, the Gamecocks went 6-7 including 3-5 in SEC play. This was a big improvement from the season before where the Gamecocks 3-9 with a 1-7 SEC record. Muschamp knows his team needs to be even better and noted that they need to be tough. The coach was available at SEC Media Days to talk about South Carolina’s upcoming season.

The Gamecocks were a below-average offensive team in 2016, ranking last in yards per game and points per game. They were the only team in the SEC to score less than 20 points a game. However, despite the offensive futility, the team did show promise on that side of the ball. Quarterback Jake Bentley had a strong showing in the Birmingham Bowl against the USF Bulls, throwing for 390 yards on 32/43 passing while throwing for three touchdowns and two interceptions. He is expected to be the team’s starting quarterback in 2017. Despite being only 19, Muschamp has the utmost confidence in him being the leader of the team.

On the recruiting trail, the Gamecocks got huge news when dual-threat quarterback Dakereon Joyner, the nation’s 223rd-ranked player per 247sports, announced his commitment to the team. As a junior in high school, Joyner averaged 235 passing yards per game while throwing for 19 touchdowns and five interceptions. He also averaged 70 rushing yards per game and rushed for four touchdowns.

Rico Dowdle was the team’s leading rusher last season, rushing for 764 yards and six touchdowns on a solid 5.7 yards per carry. He rushed for 100+ yards three times including a 226-yard performance against Western Carolina. Among receivers, Deebo Samuel was the leader with 783 receiving yards. Samuel was especially impressive in the Birmingham Bowl, catching 14 passes for 190 yards and one touchdown.

The Gamecocks added plenty of defensive playmakers on the recruiting trail. The crown jewel of South Carolina’s class is cornerback Jamyest Williams. Williams was the 74th overall player and eighth ranked player at his position his senior year, per 247sports.