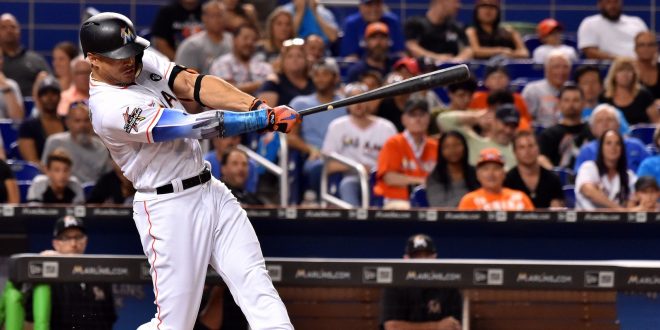 Marlins Look to Turn Things Around Against Phillies

The second half of the season has not gone as planned for the Miami Marlins.

The Fish were swept by the red-hot Los Angeles Dodgers this weekend as they fell to 41-49 on the year. Miami finds themselves in fourth place in the National League East, 13.5 games behind the Washington Nationals.

Monday night provides an excellent opportunity for the Marlins as they face the last place Philadelphia Phillies in the first of three games at Marlins Park.

Philadelphia is an abysmal 30 games under .500 as their record stands at 30-60. Miami has won three straight against the Phillies, the longest winning streak either side has had in almost two years. The last time the Marlins beat Philadelphia four times in a row was in 2015. Miami owns a 105-96 all-time record at home against the Phillies (27-22 at Marlins Park).

Giancarlo Stanton looks to get himself rolling after going 1-for-10 in the series against the Dodgers. Stanton usually fares well against Philadelphia, the slugger has 20 career home runs against them. Christian Yelich always finds a way to get on base against the Phillies as he has a .294 batting average and a .374 on base percentage against the division rival.

The Phillies have not yet determined who will be pitching for them in game two of the series but Adam Conley (2-3, 7.53 ERA) will be on the bump for the Marlins.

The first two match-ups  of the series between the Marlins and Phillies will begin at 7:10 p.m. and will conclude with a 12:10 p.m. matinee before Miami has an off-day Thursday.