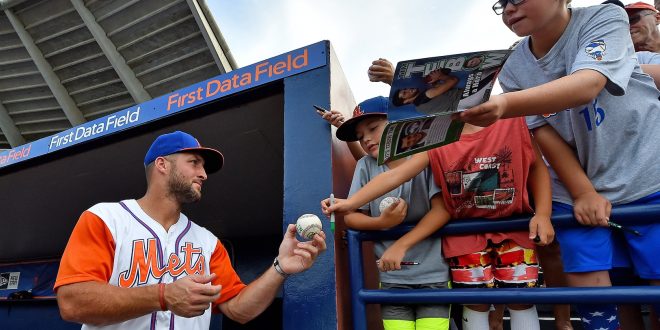 Tim Tebow Continues to Surge for the St. Lucie Mets

Former Gator Tim Tebow has been in the St. Lucie Mets’ roster for less than a month now and has gained a substantial amount of attention with his recent surge at the plate.

The 29-year-old former Heisman Trophy winner played 64 games for the Columbia Fireflies in Regular-A before being promoted to High-A league. Since moving up, he’s played in 23 games for the Mets.

Although it’s still early in the season, there have been no complaints on his underrated performance.

Until almost a year ago, Tebow hadn’t played in the diamond since his junior year of high school. He recently had an exclusive interview with TCPalm on Thursday explaining his feelings towards his game. Tebow said he feels more at ease with his game because of how comfortable he’s been batting.

“Playing baseball for longer, I think that helps. Also (hitting coach) Luis (Natera) and (manager) Chad (Kreuter), getting to work with them every day and just what we’re doing out there — taking pitches, seeing, tracking,” Tebow said. “I feel more comfortable with my swing, feel more comfortable with my game plan I’m having against pitchers and then just playing more baseball helps, too.”

Remarkably, Tebow has set career highs in slugging percentage, on-base percentage and on-base plus slugging this season in the 23 games with the St. Lucie Mets.

Tebow has three home runs in 22 games with St. Lucie, matching his total with Columbia. His batting average has also been impressive currently being at .320, which is also a career high, going into Friday night’s game against the Florida Fire Frogs.

Since the Mets called up Tim Tebow to Class A, he's batting .327, while carrying a 11-game hitting streak & tonight…. he hit a walkoff HR! pic.twitter.com/K7qfv1asGP

The St. Lucie Mets are currently sixth in their division and continue to sit last in the standings.