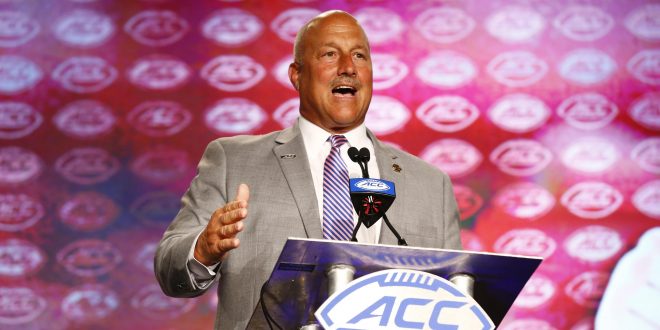 Appearing on ESPN Gainesville’s Sportscene with Steve Russell Thursday, Addazio discussed a number of topics. Among them were his time coaching the Florida Gators, his thoughts on the 2016 season and a look ahead to 2017.

Addazio holds an all-time coaching record of 37-38, 24-27 at Boston College. Some of his accolades include being the former Offensive Line coach for the Gators from 2005-2008, including two national championships.  He would then become the Assistant Head Coach for the team from 2008-2010 before becoming Temple University‘s head coach from 2011-2012. Addazio has been the head coach for Boston College since 2013.

Addazio is feeling very confident in his team for the 2017 season. The schedule though is difficult with showdowns against Florida State, Notre Dame and the reigning national champion Clemson Tigers.

Other notable games for the Eagles include conference battles against Louisville and Virginia Tech.

Addazio has no lack of confidence for his team and program heading into the 2017 season.

“We’re very confident. We’ve got a team that we’ve been grooming and recruiting too the last couple of years,” said Addazio. “It’s a talented team. We have the most speed and athleticism we’ve ever had here,” continued Addazio.

The Eagles are hoping to translate their current team into a national championship-level squad and Addazio believes that he has a team that has meshed well enough to do so.

“We have a much more veteran team and we’re looking forward to watching them play,” said Addazio.

The Eagles and Addazio are hoping to translate the offseason success from practice into a title, believing they have the tools to do it.

One of the keys for Boston as well is better play on offense, according to the head coach.

“If we can getter better play on offense, particularly the quarterback position, I think you’ll see our win total increase and take another step towards our goal [of being ACC Champions],” said Addazio.

The Eagles are looking to use 2017 to rebound from a less-than-stellar 2016 season. The team was 7-6 overall with a 2-6 record in ACC conference play. Some of the conference losses include close games such as the Georgia Tech 17-14 loss to blowouts such as the 49-0 loss to Virginia Tech and 52-7 loss against Louisville.

Despite the heartbreaking losses, the Eagles would stamp a postseason appearance with a bowl game. They defeated the Maryland Terrapins in the 2016 Quick Lane Bowl 36-30, creating a little momentum for them in the upcoming season.

When asked if winning a bowl game builds momentum for a program, Addazio says definitely yes.

“I don’t think there’s any question. You want to win those games because those games can set the tone for the offseason and regular season and can put a positive or negative spin on your year,” said Addazio.

The Eagles’ head coach would also discuss how their season started compared to how it ended during the 2016 season.

“We started out finding a way not to win but by the end of the year we were learning how to find a way to win,” said Addazio.

Look Back at Gator Coaching Days

Addazio is a head coach with a championship pedigree stemming from his days at The Swamp. He boasts two national championships with the Gators during the 2006 and 2008 seasons.

Starting as the Offensive Line coach for Florida in 2005, Addazio would be an important part of the Gators’ 41-14 national championship win on January 8, 2007 against the Ohio State Buckeyes in Glendale, Arizona. The Gators would become the one in 12-1 on the Buckeyes’ record in 2006 while the Gators improved to 13-1 on the 2006 season (7-1 SEC).

Addazio would then become the Assistant Head Coach under the guidance of Urban Meyer in 2008, once again leading to a national championship 24-14 victory over the Oklahoma Sooners on January 8, 2009 from Miami.

Addazio would stay on the coaching staff for Florida until 2011 when he became the new head coach at Temple.

The upcoming season for the Boston College Eagles begins on Friday, Sept. 1 at 9:30PM on the road when they face off against the Northern Illinois Huskies. They open ACC play the following week with their home opener against Wake Forest.