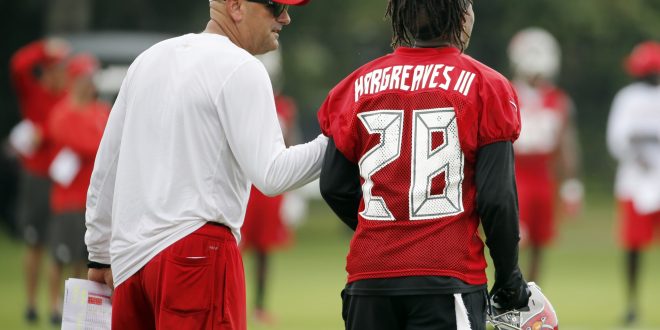 The upcoming NFL season is looking to be a big one for the Tampa Bay Buccaneers. After finishing second in the NFC South and compiling a 9-7 record last year, the Bucs are looking to kick it up a gear and become contenders for the Super Bowl. In order to do so, they must continue to work hard in their training camp.

Once again leading the charge for Tampa Bay will be third-year quarterback Jameis Winston. This year, he will be surrounded by a collection of players that many believe will give him the offensive weapons the team needs to be successful.   One in particular; DeSean Jackson.

The other addition to the Bucs’ offense comes in the form of 2017 draft pick O.J. Howard at the tight end position. Head coach Dirk Koetter is looking to use a two tight-end formation for great match ups this year during games and will look to effectively implement it in hopes of reaching victory and success.

The team will be without veteran running back Doug Martin for the opening three games due to a suspension resulting from a positive test for PEDs. Martin served the first of four games at the end of the previous season and will continue to serve the other three games in suspension at the start of the 2017 season.

The pressure is on Winston and the new offensive weaponry because many believe this team is a playoff contender in the eyes of many. Some even feel they are the most talented team since the 2003 Super Bowl championship team, according to Trevor Sikkema of the Pewter Report.

One of the biggest names on the defensive side of the ball is former Florida Gators defensive back Vernon Hargreaves III. The former first-round pick in 2016 has adopted a new way of playing on the field after being talked to by Winston and Koetter. Hargreaves believes that having the one season of experience in his belt will pay off in the long-run.

“I have a whole 16 games under my belt now, so it’s a little bit easier now,” said Hargreaves to Buccaneers.com. The staff has noticed that Hargreaves is playing with more aggression, which should translate to results on the field. The rookie learning curve would catch up to him at times a year ago but he appears to be healthy and ready to go, heading into the 2017 season.

Hargreaves is just one key for the defensive side of the ball for Tampa Bay. Koetter believes the defense is looking as great as it will when they open the season. Hargreaves and the rest of the defense will have to compete against good offensive teams in its division like the New Orleans Saints, the Carolina Panthers and the focused and determined Atlanta Falcons.

This defense, along with a star-studded offense, is looking to lead Tampa Bay to the promised land atop the NFC South and a potential Super Bowl playoff run.

All in all, the Tampa Bay Buccaneers are looking to make noise in 2017. They begin their season with an in-state road game against the Miami Dolphins; the game takes place on September 10 at Hard Rock Stadium in Miami. For more on the team, follow their Twitter page and stick with ESPN Gainesville as the NFL season progresses.