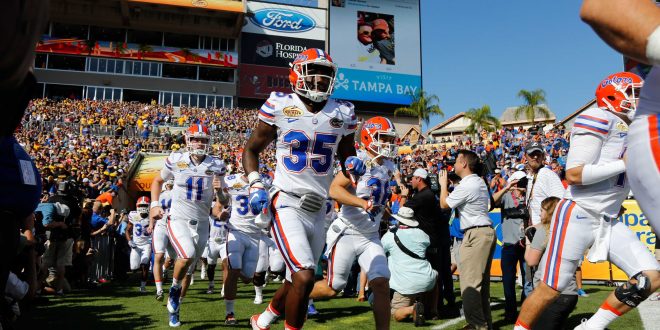 Gator football Defensive Coordinator Randy Shannon is as simple as they come; his tactics on the defensive scheme are to find and play the best 11 guys the team has available, especially if they’re fast.

“If guys can play fast without thinking a lot, then you’re going to be very successful,” Shannon said at Florida’s Media Day last week.  Shannon finally got his chance once Geoff Collins left to be the head coach at Temple. Shannon’s defense completely shut down Iowa by not allowing them to even score a touchdown in the Outback Bowl after Collins left and remember, he’s no stranger to the spot, having served as Miami’s DC from 2001 to 2006.

The defense took a major blow when they lost eight players to the NFL Draft this past spring.  The total has gone up to 14 players transferring to the NFL in the past two years. This will be a young defensive team, but a lot of its young players did get to play last year because of injuries.  But the Gators suffered a big blow in camp when senior Marcell Harris suffered a tear in his right Achilles tendon about two weeks ago. Harris is considered to be one of the team’s best defensive assets.

“I always told the coaching staff this ain’t the NFL where we can pick someone up off the waiver wire … we got to coach everybody we have,” Shannon said.

Replacing Harris is going to be difficult for the Gators. They have a couple of experienced corners in Duke Dawson and Chauncey Gardner, who might end up as one of the best defensive pairs in the nation.

Dawson is expected to be one of SEC’s top defensive players in the entire season and can be found on almost every pre-season All-SEC team. As for Gardner, Shannon said he’s an extremely versatile player. Gardner has potential and it was notable from his freshman season last year, but so much is still unproven.

“With Chauncey, he can do multiple things,” Shannon said, “but you’ve got to have him tuned in to what he needs to get done.”

Shannon has high hopes for his returning players; Nick Washington, CJ McWilliams, Jabari Zuniga and Joseph Putu among them.  These are among the favorites to add an impact to this defensive young core.

After a great Day 1, I'm excited to see the guys together on the field as a single unit today. Good things are happening in Gainesville! pic.twitter.com/VlA6oxQu3M

Recent grad from the University of Florida. Editing all articles on here while helping out the newbies. Love all things basketball.
@@MarcoJMartinez_
Previous Bucs Continue Hard Work in Training Camp
Next Former Gator Marcus Maye Adjusting to NFL